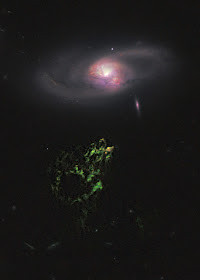 HP - The Hubble Space Telescope got its first peek at a mysterious giant green blob in outer space and found that it's strangely alive. The bizarre glowing blob is giving birth to new stars, some only a couple million years old, in remote areas of the universe where stars don't normally form.

The blob of gas was first discovered by a Dutch school teacher in 2007 and is named Hanny's Voorwerp (HAN'-nee's-FOR'-vehrp). Voorwerp is Dutch for object.

Parts of the green blob are collapsing and the resulting pressure from that is creating the stars. The stellar nurseries are outside of a normal galaxy, which is usually where stars live.

That makes these "very lonely newborn stars" that are "in the middle of nowhere," said Bill Keel, the University of Alabama astronomer who examined the blob.

The blob is the size of our own Milky Way galaxy and it is 650 million light years away. Each light year is about 6 trillion miles.

The blob is mostly hydrogen gas swirling from a close encounter of two galaxies and it glows because it is illuminated by a quasar in one of the galaxies. A quasar is a bright object full of energy powered by a black hole.

The blob was discovered by elementary school teacher Hanny van Arkel, who was 24 at the time, as part of a worldwide Galaxy Zoo project where everyday people can look at archived star photographs to catalog new objects.

Van Arkel said when she first saw the odd object in 2007 it appeared blue and smaller. The Hubble photo provides a clear picture and better explanation for what is happening around the blob.

"It actually looked like a blue smudge," van Arkel told The Associated Press. "Now it looks like dancing frog in the sky because it's green." She says she can even see what passes for arms and eyes.

Since van Arkel's discovery, astronomers have looked for similar gas blobs and found 18 of them. But all of them are about half the size of Hanny's Voorwerp, Keel said.

NPR - Back in 2007, as part of a crowd-sourced study program called Galaxy Zoo, a Dutch school teacher discovered a very odd celestial object: It looked like a great, green blob floating in space and at the time it was inexplicable.

Today, thanks to the Hubble telescope, we have an unbelievable picture of Hanny's Voorwerp, or Hanny's Object, as it is now known. And we also have a better idea of what it is: Researchers said the blob is not a galaxy but a "twisting rope of gas, or tidal tail, about 300,000 light-years long that wraps around the galaxy [IC 2497]."

In a press release from the University of Alabama, Dr. Bill Keel, professor of astronomy and leader of Hubble's Hanny's Voorep study, presented two surprising findings:

First, that very young stars are forming inside the tidal tail. "The region may have been churning out stars for several million years," said Keel. "They are so dim that they have previously been lost in the brilliant light of the surrounding gas."

Keel told us that this is remarkable because this is not the kind of environment in which you would usually find star formation.

Second, Hanny's Voorwerp was lit up by a powerful beacon of light called a quasar, which formed as a byproduct of the harsh conditions created by a supermassive black hole at the center of the galaxy. Keel said the tail likely formed as the result of energy from two merging galaxies. That green light we see is glowing oxygen.

"We just missed catching the quasar because it turned off no more than 200,000 years ago, so what we’re seeing is the afterglow from the quasar," said Keel. "This implies that it might flicker on and off, which is typical of quasars, but we’ve never seen such a dramatic change happen so rapidly."

Update at 2:56 p.m. ET: We just spoke to Dr. Keel. He notes that one of the things this study might prove is that these kinds of objects and this kind process may be "pretty common."

"We were working under the assumption that this would've have been the closest quasar to us," he said. "But it's weird that it would doing something so unusual."

Keel said beyond the science, this is also an illustration of how important a project like Galaxy Zoo is. Essentially, Galaxy Zoo allows hundreds or thousands of volunteers to sift through images after taking a quick tutorial of what to look for.

Keel is looking for more green blobs, and he's using volunteers to find them. Galaxy Zoo users looked through images of 15,000 galaxies. They narrowed that down to 100 galaxies of interest and then scientists further winnowed it down to 18, which they will look at using high-powered telescopes.
Lon Strickler at 1:50 PM
Share
‹
›
Home
View web version