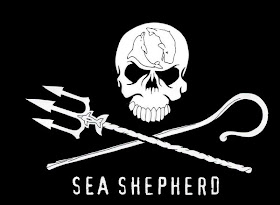 The Japanese ship issued warnings to the activists' boat and none of the Japanese whalers were hurt, the institute said.

The institute condemned the actions of the campaigners and reiterated that the Japanese whaling mission is legal.

The clash followed an earlier attack by the Sea Shepherd's other ships Steve Irwin and Bob Barker against the Japanese whaling ship Yushin Maru-3 in Antarctic waters on New Year's Day.

Anti-whaling nations, led by Australia and New Zealand, and environmental groups have long criticised Japan for its whale hunts, describing them as cruel and unnecessary.

However, Japanese officials and whalers have argued that whaling is an important part of Japanese culture.

Japan kills hundreds of whales a year under a loophole in the 1986 moratorium on commercial whaling that allows "lethal research".

Loud and violent protests by Western activists have fuelled Japanese public opposition to the anti-whaling movement. 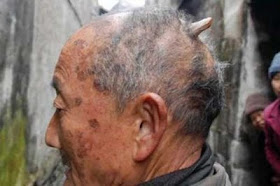 Horned Man in China
A man from Ziyuan, southern China has grown a bizarre horn on his head measuring three inches - and it's still growing.

Huang Yuanfan, 84, said the odd growth started two years ago as a small bump but just grew and grew.

He said: ‘I tried picking at it and even filing it but nothing changed it. The horn just kept getting bigger.’ Yuanfan says it has now reached three inches and is showing no signs of stopping.

He added: ‘Doctors say they don't know what caused it but if they try to take it off it will just come back. I try to hide it beneath a hat but if it gets much longer it will be sticking out the top.’

Suppose that just after you finish reading this article, you keel over, dead. Perhaps you’re ready for such an eventuality, in that you have prepared a will or made some sort of arrangement for the fate of the worldly goods you leave behind: financial assets, personal effects, belongings likely to have sentimental value to others and artifacts of your life like photographs, journals, letters. Even if you haven’t made such arrangements, all of this will get sorted one way or another, maybe in line with what you would have wanted, and maybe not.

But many of us, in these worst of circumstances, would also leave behind things that exist outside of those familiar categories. Suppose you blogged or tweeted about this article, or dashed off a Facebook status update, or uploaded a few snapshots from your iPhone to Flickr, and then logged off this mortal coil. It’s now taken for granted that the things we do online are reflections of who we are or announcements of who we wish to be. So what happens to this version of you that you’ve built with bits? Who will have access to which parts of it, and for how long? Continue reading at Cyberspace When You’re Dead


Pope: 'God was behind Big Bang, universe no accident'
newsdaily - God's mind was behind complex scientific theories such as the Big Bang, and Christians should reject the idea that the universe came into being by accident, Pope Benedict said on Thursday.

"The universe is not the result of chance, as some would want to make us believe," Benedict said on the day Christians mark the Epiphany, the day the Bible says the three kings reached the site where Jesus was born by following a star.

"Contemplating it (the universe) we are invited to read something profound into it: the wisdom of the creator, the inexhaustible creativity of God," he said in a sermon to some 10,000 people in St Peter's Basilica on the feast day.

While the pope has spoken before about evolution, he has rarely delved back in time to discuss specific concepts such as the Big Bang, which scientists believe led to the formation of the universe some 13.7 billion years ago.

Researchers at CERN, the nuclear research center in Geneva, have been smashing protons together at near the speed of light to simulate conditions that they believe brought into existence the primordial universe from which stars, planets and life on earth -- and perhaps elsewhere -- eventually emerged.

Some atheists say science can prove that God does not exist, but Benedict said that some scientific theories were "mind limiting" because "they only arrive at a certain point ... and do not manage to explain the ultimate sense of reality ..."

He said scientific theories on the origin and development of the universe and humans, while not in conflict with faith, left many questions unanswered.

"In the beauty of the world, in its mystery, in its greatness and in its rationality ... we can only let ourselves be guided toward God, creator of heaven and earth," he said.

Benedict and his predecessor John Paul have been trying to shed the Church's image of being anti-science, a label that stuck when it condemned Galileo for teaching that the earth revolves around the sun, challenging the words of the Bible.

Galileo was rehabilitated and the Church now also accepts evolution as a scientific theory and sees no reason why God could not have used a natural evolutionary process in the forming of the human species.

But it objects to using evolution to back an atheist philosophy that denies God's existence or any divine role in creation. It also objects to using Genesis as a scientific text.
Lon Strickler at 3:52 PM
Share
‹
›
Home
View web version