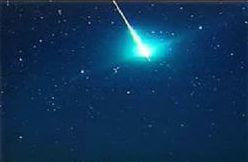 Huge Fireball Spotted Over Southeast US
todaysthv - Quite a stir across the state tonight, lots of folks saw a big ball of fire streaking across the sky.

The Sebastian County Sheriff's Office says it was a meteor and likely hit near Poteau Mountain, Oklahoma.

We contacted amateur astronomer Steven Meeks who writes an astronomy blog on todaysthv.com, he says it was likely a meteor and since some people saw it burn a bit greenish -- it probably contained copper.

He also says it was probably no bigger than a pebble. According to affiliate KFSM, the meteor was also sighted in Greenwood, Jonesboro, Jackson, Miss., Biloxi, Miss., and the Florida Panhandle.

katc - At roughly 8:50pm local time an apparent meteor was spotted by observers in Acadiana including KATC's Hoyt Harris. Hoyt and Acadiana were not alone in the observation with twitter reports (#flashoflight) from Oklahoma, Arkansas, Louisiana, Mississippi, Alabama and Florida of a bright object in the sky at the same time.

A sonic boom was heard as far north as Western North Carolina where cloudy skies prohibited the viewing of the fireball. None of the reports in Acadiana mentioned a sonic boom.

The possible meteor was described as a large green ball (copper composition) with a trailing orange and yellow tail.

While there were no major meteor showers in progress there could still be a random object striking the Earth's atmosphere. Meteors as small as the size of a pea striking the Earth can put on quite a show, but many believe that this object was a lot larger.

As of press time there was no credible indication if the meteor reached the ground or just burned up in the Earth's atmosphere.

Apparently NASA's Jet Propulsion Laboratory Near Earth Object did indicate a relatively "close" flyby of an asteroid this evening passing roughly 850,000 miles (more than 3 times the distance to the moon) from the Earth. This particular asteroid was estimated to be 25-60 feet in diameter, but it remains unclear if the possible meteor was debris associated with this asteroid or not.

There will likely be additional reports and more clarifying information Wednesday. 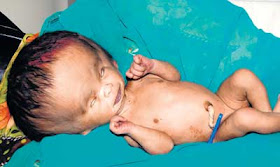 Alien-Looking Baby Scares Mother
mid-day - A mother delivered an abnormal baby last morning at Dr Hiren Thumer's hospital in Gondal in Gujarat. Sonal Waghela who delivered the baby fell unconscious when she saw its face for the first time.

She is not willing to look at its face, as it is deformed and looks like a baby from a different planet.

Except for Mukesh Waghela, Sonal's husband, no other relatives were allowed to see the child. The baby is abnormal and its face is larger than its body. Just his head weighs 2.15 kg

The baby is being spoon-fed another woman's milk, as Sonal is not willing to allow him close to her. The condition afflicting the baby occurs when water accumulates inside the brain.

Dr Thumer said, "The head swells like a balloon because of water accumulation inside the brain and hence the baby looks abnormal.

Such babies can be saved if brain surgery is conducted, else it dies within four to six months." However, at present, the baby's condition is normal.


"Big cat was prowling around my garden"
thisisderbyshire - Three sightings of big cats have been reported in Derbyshire since the new year.

A pensioner said she saw a panther-like creature in her Mickleover garden twice while a motorist claimed she saw a big cat while driving down a country lane.

And a dog-walker said he found a huge paw print in a Brailsford field.

She claimed she watched it jump over an eight-foot-tall gate.

"It was about 18 inches from the floor to the top of its head and it had the biggest yellow eyes I have ever seen," she said.

"We have a lot of cats in this area but this was about four times bigger. It was eating the bird food I had left on the floor. We haven't had many birds around lately and now I know why."

She said she saw the same creature again the following day and was 100 per cent certain it was a big cat.

She said: "I have seen pictures before of big cats and I thought it must definitely be one. It was lovely to look at with the most beautiful coat.

"I will be looking out for it now and I will be taking a photograph if I see it again."

The 50-year-old said she was driving down Findern Lane when she saw something come out of a hedge at the side of the road.

"I thought at first it was a big fox but then I noticed it was plain black," she said. "It ran straight across the road and into a field."

And a man who asked not to be named said he spotted a big paw print in mud in a Brailsford field while walking his dog.

He said: "I looked closer at it and was amazed at the size – it was about five inches wide. It was definitely too big to be a dog's paw."

The figures, released under the Freedom of Information Act, show sightings in 2010 were made in Mickleover, Littleover, Nether Heage and Overseal.

People who have seen big cats can also report it to the British Big Cats Society, which will investigate the claims.


The mainstream media’s linking of UFOs to Tucson killer
tucsoncitizen - Today, The Washington Post reported that Jared Loughner, the man in custody related to Saturday’s massacre in Tucson, may have visited a alternative-discussion forum this past summer.

The information was relayed by me to my readers on the Tucson Citizen a couple of hours ago, after a bit of contemplation.

I posted without commentary. I did not go into detail about what the article said, only that Abovetopsecret.com (ATS) had a statement on their website, along with a quote from the website’s representative.

ATS is the largest alternative-topic discussion forum on the Internet, where users can discuss UFOs, conspiracies, the paranormal and other alternative topics. I do believe that the staff of the Scottsdale, Arizona-based ATS, were sincere in wanting to help in this ongoing investigation.

As far as the newspaper that ran the article, I am unsure of their intention.

The headline for the article by The Washington Post reads:

When I read the headline, my first thought was: “So what?”

When I read the article, it stated “the site’s operators believe [username] Erad3 was accused Arizona shooter Jared Lee Loughner, 22.”

The keyword in the headline is “apparently” and in the article is “believe”. It’s not 100% certain that Erad3 was Loughner, but the posts made by Erad3 used the same language that Loughner used in his YouTube videos. So, the ATS representative does believe that it was Loughner.

So, I tried to figure out what would possess The Washington Post to release a speculative article like that now, when we have not even buried the victims of the horrific tragedy in Tucson.

Well, we do know that this newspaper in Washington enjoys making light of UFO stories. When retired military men came forward in September, in a news conference to allege that UFOs interfered with nuclear facilities, the resulting coverage was inexcusable. Their journalist said that he only went to the news conference for the cookies and pastries offered at the National Press Club.

Basically, the cookies were the highlight of the resulting report of the news conference.

There were no references to Congresswoman Gabrielle Giffords in Erad3′s posts on ATS, as stated by the newspaper, so it isn’t apparent why the newspaper ran with a speculative article.

I can speculate, but I won’t.

My problem with the article, is not that it could be spun to assert that people who discuss alternative-topics, like UFOs and conspiracies, are “mentally unstable”. Instead, I would expect this newspaper to be 100% certain about the identity of the poster Erad3. The estimated 99%” certainty from the website owner that it was Jared Loughner isn’t good enough. The newspaper should have been 100% certain before running that article.

Also, running that article, which has been spreading all over the Internet all day, really could have waited.

Skull pulled from box renews mystery
herald-tribune - Police in Bradenton, FL are trying to solve a mystery over how an unidentified human skull sat in a box in their property room for more than 35 years until it was discovered last week.

And they have virtually no records to indicate to whom it belongs or what happened to the person.

In late 1974, someone found a human skull submerged in 4 inches of water in an area vaguely described as "near Bradenton."

The skull was apparently sent by the Bradenton Police Department to the FBI and back again to the local agency's evidence room, where it was wrapped in newspaper, put in a box, marked with the word "SKULL" and forgotten.

Until last week. Detectives, sifting through old evidence to see if any of it could be used to crack cold cases, found the box, and the skull, and are now trying to figure out to whom it belongs.

Bradenton police believe it may have been part of a missing person's case from the early 1970s and plan to ask the FBI if it retained any paperwork on it.

Local police say records regarding the skull were long ago destroyed. Detectives have been sifting through old newspaper clippings about disappearances to get started. They found several possible scenarios, including: Wendy and Kenny Wilson, 12 and 14 years old, who left for school one day in 1974 and vanished; Donna Jean Massey, an epileptic teenager who never returned from a camping trip in Riverview and a Wisconsin man who was last seen fishing on the Manatee River.

DNA testing or carbon dating may be used to help police narrow their search. For now, though, the case remains as mysterious as it was 36 years ago.

Italian man shot in head sneezes out bullet
telegraph - An Italian man who was struck in the head by a stray bullet during New Year's Eve celebrations is recovering after sneezing the projectile out of his nose. Darco Sangermano, 28, was hit in the temple by the .22 calibre bullet while wandering with his girlfriend through Naples – a city in Italy notorious for its rowdy New Year celebrations, often involving firearms and powerful fireworks.

The bullet went through the right side of his head, behind his eye socket and lodged in his nasal passage but miraculously did no serious damage. Bleeding heavily, he was taken to hospital in an ambulance shortly after midnight, but while waiting to be seen by doctors he sneezed and the bullet shot out of his right nostril.

Mr Sangermano, a craftsman from Turin, returned to his hometown after being released from hospital. "The route of the bullet broke his temporal bone, near his temple, and this slowed down the bullet which grazed his eyeball without hitting it directly," Dr Guglielmo Ramieri said.

Surgeons operated on the eye, removing splinters of bone that the bullet left in its wake. "The operation lasted several hours but he is fine," said Mr Sangermano's uncle, Vito Sangermano. "The doctors agree that he will not lose the use of his eye, even if for now his sight is blurry." In the next few weeks Mr Sangermano will undergo laser surgery to repair damage to his retina and is expected to make a full recovery.
Lon Strickler at 2:48 PM
Share
‹
›
Home
View web version