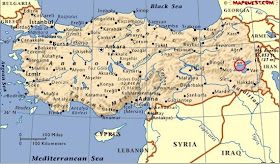 I received the following email from Huseyin in Turkey on Sunday, December 5th. I needed to clean up some of the broken English:

Dear Sir - I write to you after witnessing a creature near my home in Ahlat, Turkey on the 26th of September this year. My friends and I were taking a day long boat ride on Van Golu (Lake Van). Near east Akdamar Island we noticed a violent boil on the surface. When we got closer, I saw a large eel-like creature with a high long fin across the back. I attempted to take a photograph but the creature dove into the darkness. Since I was so close to the creature I was able to get a very reliable description - about 20 meters long, mottled brown with a high ray or fin that extended across the entire back. I got a glimpse of the head which had round eyes that were front set, not like that of a fish, with a pair of ears or flaps.

I presented the description to a biologist and government specialist the following week but was told that I most likely saw a sturgeon or another uncommon species of fish. This is not what I witnessed. I sent an email to 2 other crypto organizations but neither responded. My friend recommended you. What is your opinion of my sighting? Please contact me at your convenience. Thank you - Huseyin

I wrote back to Huseyin. His reply didn't offer much more information other than there had been reports of a similar creature in the past and a more recent sighting a few weeks ago near another island on the lake. He also stated that the only fish known to survive in Lake Van are the Pearl Mullet or Darekh. 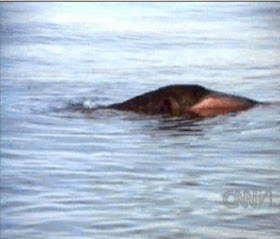 From CNN in 1997: Sightings of the Lake Van monster were first reported about two years ago, but further evidence was offered on Tuesday: bad quality amateur pictures of something long and dark moving in the middle of the lake.

After each sighting, professional camera crews have rented boats to try to capture the alleged beast clearly on film, but were unsuccessful each time.

The subject became an obsession for 26-year-old Unal Kozak, a Van University teaching assistant who has been talking to eyewitnesses since the first sightings.
kozak

Stationing himself at spots where most of the sightings were reported, Kozak says he saw and filmed the so-called monster on three occasions. Kozak also wrote a book on the creature, including drawings of the monster based on the descriptions of some 1,000 witnesses.

He says the creature is about 15 meters (49.5 feet) long. Public opinion is divided over whether the Lake Van monster is a clever hoax to attract visitors to a region that could use some tourist revenue.

The city of Van is in an underdeveloped area of eastern Turkey that for years has lost out to holiday resorts in the west of the country.

The pictures have been sent to Cambridge University for examination, and Jacques Cousteau, the world-famous marine biologist, is expected to visit and examine the lake.

...this lake was formed some 6,000 years ago when the volcano that is Turkey's lesser known Nemrut Dağı (Mt. Nemrut) erupted and threw the entire top of the mountain into the lake, thereby cutting off the water's natural escape route into a river near Muş. The waters of Lake Van are known for being highly alkaline, which means that it's actually possible to wash clothes in them without using soap. Swimmers also find the water extremely buoyant, although pollution around the main population centers means that it's not really that wise to risk bathing...

...Lake Van is home to all sorts of unusual beasties, some of them real, others entirely fanciful. Perhaps its most prized resident is the inci kefalı (pearl mullet), a fish so revered that it's spawned commemorative statues not just in Van itself but also in the small town of Erciş. Then there is the Van Canavarı, the Lake Van Monster, a creature uncannily like Scotland's Loch Ness Monster and just as elusive -- the closest you'll come to it is the statue in Van's Feqiye Teyran Park where a diplodocus-like creature can be seen wrapping its long neck around other local features... - sundayszaman.com
Lon Strickler at 2:27 PM
Share
‹
›
Home
View web version