Arguments can be made that the evidence for ancient astronauts comes from supposed gaps in historical and archaeological records, and they also maintain that absent or incomplete explanations of historical or archaeological data point to the existence of ancient astronauts. The evidence is said to include archaeological artifacts that are beyond the presumed technical capabilities of the historical cultures with which they are associated. This also includes artwork and legends that are interpreted as depicting extraterrestrial contact or technologies.

Notwithstanding these contentions, let us say that there is an axiom to the ancient astronaut theory. Then we need to ask, who were these beings? What did they represent to the inhabitants of earth? Where these beings the ancient Gods of antiquity?

I would like to periodically chronicle my speculation of how the native people interpreted these unknown entities. This edition describes the Wandjina.

In 1838, a party led by Captain George Grey stumbled across paintings in the Kimberley district of Western Australia that have been the subject of controversy ever since. Exploring among the hills near the Prince Regent River, Grey's group found a number of caves in which many extraordinary figures were painted.

Describing the main painting in one of the caves Grey investigated, he wrote in his journal that "It was the figure of a man, ten feet 6 inches [3.2 metres] in length, clothed from the chin downwards in a red garment, which reached to the wrist and ankles"

"...The face and head of the figure were enveloped in a succession of circular bandages or rollers...these were colored red, yellow and white: and the eyes were the only features represented on the face. Upon the highest bandage or roller, a series of lines were painted in red, but...it was impossible to tell whether they were intended to depict written characters, or some ornament for the head.."

Grey continued to state that the paintings: "...had the appearance of being much more defaced, and ancient, than any of the other's that the party had seen".

Wandjina (the spirit in the cloud), as the paintings have become known, have given rise to many theories. Some people contend that the Wandjina represent visiting extraterrestrials, with their spherical helmets to protect them from our earthly environment. The existing rock art has depicted them as having huge upper bodies and large heads. Their faces show eyes and nose, but typically lack mouths. Around the heads of Wandjinas there appears to be lightning and feathers.

To the Australian Aborigines, the Wandjina (or Wondjina) were cloud and rain spirits who, during the Dreamtime, painted their images (as humans but without mouths) on cave walls. Dreamtime is a sacred era in which ancestral Totemic Spirit Beings formed The Creation. It has been said if the Wandjina had mouths, the rain would never cease. They also lacked limbs and had a skull-like face. Their ghosts still exist in small ponds. Walaganda, one of the Wandjina, became the Milky Way.

The Wandjinas have common colors of black, red and yellow on a white background. Wandjinas are believed to have made the sea, the earth and all its inhabitants. The Wandjina is thought to have special powers and if offended, can cause flooding and intense lightning. The paintings are still believed to have special powers and therefore are to be approached cautiously. 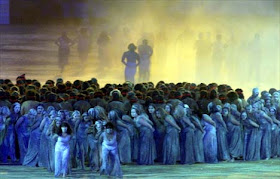 Aboriginal actor-historian Ben Blakenley tells of "The Legend of the Silver Bird", "Long long ago, far back in the Dream Time, a great red coloured egg (spaceship) came down from the skies. It tried to land safely on the ground but broke (crash landed). Out of it emerged white-skinned culture-heroes (gods) and their children."

"The children's elders soon died, either through their old age or because they could not accustom themselves to our atmosphere. The children however were young and able to adapt more easily to their new surroundings. They carved and painted the likenesses of their parents upon cave walls to perpetrate their memory. In time the great red colored egg rusted away until its remains had merged with the ground, thus creating the red soil of Central Australia. The children of the culture heroes who came from the sky grew in numbers until they eventually populated the whole land, their skins turning black due to the hot climate."

Scholars have long argues whether these are visiting astronauts and their spacecraft, or mythical culture heroes and toltemic designs. Ufologists have pointed out that many of these puzzling shapes are similar to UFO shapes which have been sighted and reported in the 20th century. The implications are that 15,000 years ago strange shapes were observed in the skies. Whether these were spacecraft containing ancient astronauts remains unknown. There is evidence both for and against the theory of ancient astronauts and that they may once have visited and had some influence upon the ancient history of Australia.

An ancient astronaut legend comes from the Blue Mountains of New South Wales. This was told by the Dharuk tribe which formerly occupied a vast area stretching from the Hawkesbury River-Sydney District across to the western slopes of the Blue Mountains. The legend concerns "Biramee the Bird Man," who laid a great egg near what is now the town of Linden, from which the ancestors of the Aborigines hatched. 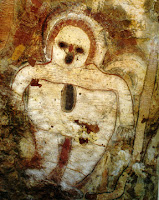 Another legend contends that Biame, the Sky God, came down from the sky in a big dreamtime hunt across the Blue Mountains. He gave the Aborigines the spear thrower and the boomerang, teaching them how to hunt their food and also to make fire...then he returned to the sky from whence he had come. The carvings not only depict Biame but also many strange little figures which were also the totemic figures of the various tribal groups that peopled the area. Among these totemic figures carved on the stone is a strange fish-like object which some have theorized to be space-craft. They also point to a strange human figure clad in garments which could be said to resemble an astronaut; others see a resemblance between this figure and a Egyptian soldier equipped with helmet and shield and say that the above creation myth is more reminiscent of those of the middle-east.

Although these finds may not be proof of extraterrestrial civilizations having visited earth in antiquity, there is certainly evidence which could be said to lend considerable weight to the ancient astronaut theory in Australia. The evidence primarily consists of archaeological finds which imply the former existence on this continent of a race of non-aboriginal man who inhabited Australia before the dawn of history, and who have left behind them traces of a vast astronomical knowledge. Similar features are to be found elsewhere throughout the ancient world. However, the mystery remains as to how these ancient peoples came by their knowledge often without sophisticated equipment which is only now available too modern man.
Lon Strickler at 1:15 PM
Share
‹
›
Home
View web version