Anomalous Allegories From The London Underground 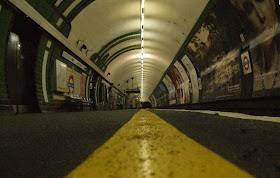 Folklorists do know that the underbelly of the city is teeming with all manner of spectres, and a majority of these seem trapped in the London Underground.

The most impressive ghost, or recording in this case, is that of a train which was last observed around the 1920s in the vicinity of South Kensington; whilst on the East Finchley to Wellington underground, legend has it that an old steam train silently travels on through the Northern Line.

Surely a majority of apparitions that are said to stalk the tracks and tunnels are either in limbo as spirits, possibly people who either died down below or simply feel tied there after once being employed.

Workmen, or at least ghostly figures perceived as workmen, have been seen at West Brompton Tube Station, South Kensington, and Vauxhall, with the Vauxhall spectre appearing as a seven-feet tall man in a cap, making for an eerie and imposing sight. Tulse Hill and Stockwell also have their own phantom workmen, whilst stations such as Covent Garden, Lewisham and Farringdon all seem to be haunted by people who were tragically murdered, whilst nuns and monks have been sighted drifting silently through the Bakerloo and Jubilee Line. The monks have been seen as recently as 2000, on a path from Westminster to Stratford. It is believed that ground work had disturbed several graves, or indeed unblocked some dormant portal to the ethereal void.

The spectral girl of Elephant & Castle appears to be a rail relation to the phantom hitchhiker legend, in that several witnesses have described, often whilst sitting in an empty carriage, encountering a young woman who takes a seat but often vanishes between stops. Just like many phantom hitchhiker myths, this particular spook story is vague, but many have heard of her exploits.

Even spookier is the Egyptian phantom said to have once prowled the British Museum station, which closed in 1933. The figure, adorned in head garments and loin cloth, was said to walk a tunnel that allegedly once wound from the station to the Egyptian Room in the museum, although such a passage was allegedly denied by London Underground, especially after two women mysteriously vanished from the Holborn platform that was situated just one stop along from the museum. Bizarrely, during the time of the disappearances, odd yet unspecified marks were found on the walls of the museum station, and eerie moans had often been reported echoing through the cold walls.

London Underground remains one of the capital’s eeriest places, with many a chilled researcher turning down the opportunity to spend a night down there. Are there really lines that go nowhere in particular? And what about the stations built right next to Plague Pits, could such graves be the answer to some of the more sinister ghost sightings? One such pit was allegedly discovered in the late 60s at Green Park with the construction of the Victoria Line, whilst the collapse of a road at Blackheath was also blamed on the disturbance of such a pit.

For the last fifty or more years there has been a sinister legend pertaining to the London Underground that a mysterious, possibly caped figure, lurks in the cold tunnels, and is known for the ghastly act of pushing people in front of oncoming trains, usually at night. Whether this terror is mere rumour we’ll never know, because we do occasionally hear of people splattered on the rails, but whether a phantom killer is roaming the more remote platforms remains unknown.

Another classic urban legend to exist in the passageways beneath the capital emerged during the mid-1800s and remains one of London’s most obscure mysteries, yet echoes a more potent urban myth that has plagued New York’s sewer system since the early 1900s, being the possibility that alligators inhabited the murky waterways and pipe systems, feeding on rats and garbage. In the case of London’s inhabitants, there is a rumour that in 1851 beneath Hampstead, feral pigs, or hogs were prowling the depths of the sewers! Legend has it that a pregnant sow somehow ended up trapped in the gloomy tunnels, giving birth to a happy litter of excrement swilling, offal consuming offspring, even more ferocious than their known relatives that may have inhabited some nearby yard.

Sceptics argued that such animals had never been seen or heard to grunt through the drain grates, but believers in such quirky tales claimed that the reason for this elusive behaviour was simply down to the Fleet ditch, which, once encountered from the mouth of the sewer at the riverside, would have flushed the piggies back to their lair after failed attempts to swim against the rapids. - Londonist 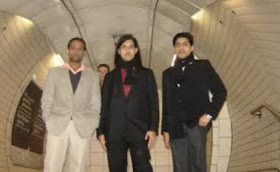 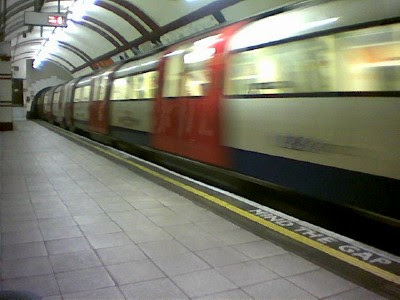 Covent Garden Underground: Late-night Tube riders say they sometimes see a theatrical performer - murdered by a rival in 1897 - standing on the Covent Garden platform. He wears a hat, gray suit and gloves and waits patiently for the train he always took home to Putney. Tube stop: Covent Garden

Theatre Royal Drury Lane: The ghost of an actor slain in 1780 is said to be a frequent performer at the theater. His skeleton - with a knife sticking out of the ribs - was supposedly found during a renovation in the 1970s. Folklore has it that those who see the ghost are destined for theatrical greatness. Tube stop: Covent Garden

Newgate Prison site: Progress came to Newgate, one of England's most notorious prisons, in the 18th century in the form of a scaffold invented to hang 12 men at the same time. Among the legends emanating from this sinister place: the snarling Black Dog of Newgate, which appeared whenever executions were to take place. Old Bailey Courthouse now stands on the site. Tube stop: St. Paul's

Route No. 7 Cambridge Gardens: Among the odd ghosts and goblins that haunt London is a wayward double-decker bus. In the mid-1930s, the bright red bus was often seen at the intersection of St. Marks Road and Cambridge Gardens in North Kensington, where the road curves sharply. The bus, which had no passengers or driver, hurtled toward oncoming traffic, forcing cars off the road. Tube stop: Ladbroke Grove

St. Bartholomew the Great: The hospital has a haunted "coffin lift," which began transporting passengers to the basement - regardless of the floor they requested - after a nurse was murdered within. The church has a ghostly monk who prowls it, sometimes appearing at the pulpit, sometimes in the shadows. The area also has a memorial to the Protestant martyrs burned to death nearby during the 16th-century reign of Roman Catholic Mary I, also known as Bloody Mary. Tube stop: Barbican

Kensington Palace: Kensington - home of Princess Diana from 1981 to 1997 - housed a string of famous royals, including 18th-century monarch George II. The song "God Save the King" was written during his reign, but nothing could stop the Grim Reaper when he came for the king in 1760. But before the monarch's death, he could often be seen gazing wistfully out his chamber window. Now, the story goes, his face is often glimpsed there. Tube stop: High Street Kensington

Tower of London: Unspeakable acts of murder and mayhem took place here during the 14th and 15th centuries, when beheadings were commonplace. Among the jail's inmates were Anne Boleyn, queen of England and second wife of Henry VIII. She was beheaded and is said to haunt a Tower residence and the Chapel of St. Peter ad Vincula, where she is buried. Tube stop: Tower Hill

Greyfriars Passage: This alley off Newgate Street leads to the site of an old churchyard burial ground, said to be haunted by two beautiful, murderous women. Queen Isabella was instrumental in having her husband, King Edward II, deposed, imprisoned and brutally murdered in 1327. She was buried with his heart on her breast. Also here is Lady Alice Hungerford, who poisoned her husband. Some say she was hanged; others say she was boiled alive. Tube stop: St. Paul's
Lon Strickler at 11:58 AM
Share
‹
›
Home
View web version