Alien Gods: Anu, Lord of the Great Above


Arguments can be made that the evidence for ancient astronauts comes from supposed gaps in historical and archaeological records, and they also maintain that absent or incomplete explanations of historical or archaeological data point to the existence of ancient astronauts. The evidence is said to include archaeological artifacts that are beyond the presumed technical capabilities of the historical cultures with which they are associated. This also includes artwork and legends that are interpreted as depicting extraterrestrial contact or technologies.

Notwithstanding these contentions, let us say that there is an axiom to the ancient astronaut theory. Then we need to ask, who were these beings? What did they represent to the inhabitants of earth? Where these beings the ancient Gods of antiquity?

I would like to periodically chronicle my speculation of how the native people interpreted these unknown entities. This edition describes Anu, Lord of the Great Above.

To the Sumerians and all of Mesopotamia, Anu was a sky-god, the god of heaven, lord of constellations, and the father not only of all the gods but also of evil spirits and demons, most prominently the demoness Lamashtu, who preyed on infants. He was the father of the Anunnaku (also spelled Anunnaki). It was believed that he had the power to judge those who had committed crimes and that he had created the stars as soldiers to destroy the wicked. His attribute was a royal tiara decorated with two pairs of bull horns. His symbol resembles somewhat like a Maltese cross, representing as it appears the four points of the compass and hence the entire heavens. His bow, which is frequently mentioned, can probably be identified as the Milky Way. 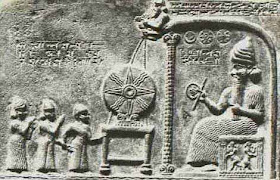 Anu possesses vast powers of an unknown nature, which seem to surpass the powers of any other Mesopotamian god. Magical in their form and nature, these powers can be employed in numerous forms. He can project rays of mystical forms resembling modern lasers that can explode on impact and erect shields and objects such as thrones and ships from this energy. He can also create dimensional portals at will to travel between earth and heaven and create spells that augment or enforce spells already in existence. He can project his image, voice or energy bolts from heaven to earth and even place bondage spells powerful enough of bonding individuals to certain realms. Anu seems to have limited precognitive and sensory awareness to perceive facts and information from beyond time and space.

Anu was considered part of a triad including Enlil, god of the air and Enki, god of water. In the Code of Hammurabi it is said that then the goddess Inanna (or Antum) of Ereck may at one time have been his consort. Anu is so prominently associated with the city of Erech in southern Babylonia that there are good reasons for believing this place to have been the original seat of the Anu cult. Anu was the god of the 'great above', and the son of the first pair of gods, Ansar and Kisar, descendant of Apsu and Tiamat.

In the Sumerian cosmology there was, first of all, the primeval sea, from which was born the cosmic mountain consisting of heaven, 'An', and earth, 'Ki'. They were separated by Enlil, then Anu carried off the heavens, and Enlil the earth.

According to the Earth Chronicles series by Zecharia Sitchin, the wife of Anu was a fertility goddess and the mother of the gods; her cult was centered in Munster. However, Anu was one of the Anunnaki who came from the planet Nibiru (Marduk). According to Sitchin's theories on Sumerian legend and lore, the Anunnaki arrived first on Earth probably 400,000 years ago, looking for minerals, especially gold, which they found and mined gold in Africa. 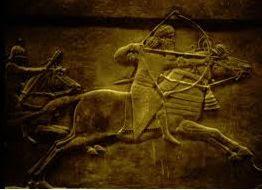 After ruling for 9 years of his own, Anu was dethroned by his son, Enlil. There have been comparisons with the myth of Anu's dethronement to that of the Greek myth concerning Zeus and his father, Cronos. Like Cronos, Anu was castrated by his son with a bronze sickle.

Anu cursed Enlil to have three miserable sons for his disobedience and escaped. He retires to the upper heavens where Anu welcomed most of the gods into this new realm he called Celestial Dilmun, but Enlil, now calling himself Dagon, was soon overthrown by his brother Hadad, now called Baal. He confined both of them to Earth and after both of them were ousted as rulers, he confined both of them to separate kingdoms in the underworld. From the heavens, Anu reclaimed his role as King of the gods.
Lon Strickler at 12:14 PM
Share
‹
›
Home
View web version