Searching For Past Travelers At Barstow's Harvey House 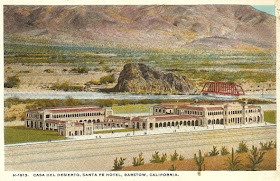 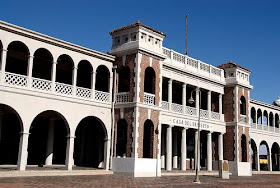 desertdispatch - It’s been nearly four decades since the Harvey House welcomed and housed travelers, but some say many of its visitors haven’t left.

Stories have trickled into the ears of Jeri Justus, executive director of the Barstow Area Chamber of Commerce, who works at the Harvey House: Rumors of orbs of light floating in mid-air, a little girl playing peek-a-boo in the foyer, an old man with a handlebar mustache standing at the top of the stairs.

Justus herself says that although she hasn’t seen anything, or anyone, she has felt their presence. She’s felt a sudden drop in temperature on a warm day, the movement of unseen bodies swaying to music.

“Definitely there are spirits there,” she said, adding that people have seen many apparitions during the Haunted Barstow tours the chamber holds in October. “I don’t believe or not believe, (but) I know these feelings that I get.”

One group — the High Desert Paranormal Society — won’t wait until October to unearth evidence that the Harvey House is a paranormal paradise. Founders Craig Case and Dave Meyer, a Barstow resident and an Apple Valley resident respectively, and their members will lock themselves up in the Harvey House starting at 8 p.m. Friday and will search the building until 2 a.m. Saturday.

Members of the High Desert Paranormal Society, a 10-year-old group with 40 participants, will have video cameras and motion sensors set up and a command station ready to catch anything out of the ordinary. Teams of two to three people will also sweep the area continuously with night-vision cameras, electromagnetic field detectors, digital voice recorders and thermometers, Case said.

“We’ve heard lots of reports coming out of the Harvey House, particularly in the basement and upstairs,” he said. “(People) seeing white apparitions and hearing strange noises. That’s what we’re looking for.”

Between 30 and 35 reports have reached the group of strange phenomena at the Harvey House, Chase said. About five years ago, the paranormal society investigated the outside of the building, but this will be the first time they have entered the building.

The Casa del Desierto station and hotel was built by the Atchison, Topeka and Santa Fe Railway and replaced an earlier one built in 1885 that burned in 1908. It was designed by renowned Fred Harvey Company architect Mary Colter in a synthesis of Spanish Renaissance and Classical Revival architecture styles.

Harvey Houses were legendary in the history of Western rail travel. Operated by Fred Harvey in conjunction with this Santa Fe Railway, the network of restaurant-hotels set a new standard in quality meal service. Barstow's Spanish-Moorish "Casa Del Desierto" opened in 1911 and closed in 1971. It was registered as one of the last and finest remaining examples of the West's famous Harvey Houses.