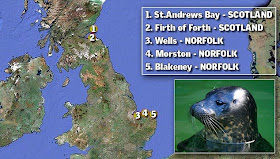 thesun - Researchers are trying to discover why dozens of mutilated seals are washing up on British beaches with their skin horrifically ripped off.

All the seals suffer the same wound — a single deep cut from head to stomach — but the top scientists can't work out what's behind the damage.

Science sleuths have been hunting for the 'murder weapon' since the first seals started dying last year, but they are still clueless. Now they are appealing to Sun readers to see if you can solve the mystery.

Horrified scientists have found around 60 carcasses so far. Most of the seals were spotted off the Norfolk coast, but ten more have been discovered at St Andrew's on the east coast of Scotland.

The cut goes all the way around the seals' bodies from head to stomach like a CORKSCREW.

Professors have so far eliminated sharks, tidal power generators and ordinary boat propellers from the list of suspects — but they have no idea what else could have caused the injuries.

The search is now on for a mystery vessel that could have inflicted the mechanical wounds.

Top mammal scientist Callan Duck told The Sun: "It's a very clean cut - it looks like one single cut. If you're cutting a loaf of bread, there's a sawing action and you leave jagged edges, but there are none of those, so it looks like one continuous movement.

"The skin has been ripped clean off the seals' jaws. It would take hours to do that with a scalpel yourself."

The clever animals have learnt to avoid swimming too close to ships, leaving Mr Duck's team puzzled that they seem to have swum into the blade HEAD FIRST.

He added: "Seals are pretty savvy creatures and they won't approach an obvious threat, but very suddenly they're being dragged head first into a rotating blade."

The Scottish killings have already hit ten per cent of the breeding population of seals — and scientists are worried that the species could soon be wiped out entirely.

The seal team at St Andrew's University has already asked the RSPCA, the National Trust and even the Scottish Government to solve the mystery — with no luck.

The baffled experts are now hoping Sun readers can piece together the puzzle for them.

Mr Duck said: "It's a good mystery. We do believe it's solvable. Once we find out where, we can move on to why and what.

"We'd like to encourage members of the public to call in and make suggestions."

Experts are also keen for any snaps of the dead seals. Mr Duck added: "They can be smelly but please take a picture."

Sharks Ruled Out In Mystery 'Corkscrew' Deaths Of Seals

stv - Sharks were ruled out as the killer of dozens of seals found in and around Scotland with unexplained "corkscrew" injuries.

Around 50 carcasses of both common and grey seals have been washed up in the past three years with a single, smooth-edged cut starting at the head and spiralling around the body.

The injuries were not consistent with any known to be potentially caused by fishing nets of boat propellers leaving marine experts still baffled by their mystery deaths.

In the past three years, 38 seals on the Norfolk and North Lincolnshire coast and a further 12 around the Firth of Tay and the Firth of Forth have been found with the deep, deadly wound.

The issue was publicised at the weekend and since then Callan Duck, of the Sea Mammal Research Unit at St Andrews University, has been following up possible leads raised by members of the public.

One theory was that a species of shark not usually seen around Britain could be the culprit.

But Mr Duck said he had now heard from experts at the International Union for Conservation of Nature who have ruled out sharks.

He believed the cause was mechanical, but remained baffled by the nature of the machine which killed the mammals.

"We have had a lot of suggestions from a lot of different people for which we are really grateful and we would like them to keep coming," he said.

"We are biologists, we are not forensic scientists. It's all under water, out of sight, so how do we find out what's happening? We are pretty flummoxed."

Mr Duck, a senior research scientist, said that once the cause has been determined, tests would be carried out in labs on dummies to see if the problem could be avoided.

As it is, the corkscrew cuts are having a serious effect on the tiny Firth of Tay colony, with around 10% of breeding females being killed by the mystery.

Seals, though inquisitive when they are young, have a canny sense of danger, Mr Duck said, so the way they were dying was even more puzzling.

"Almost all the injuries we have seen have started on or close to the head. The seals must be attracted to whatever it is that proves fatal to them.

"Seals are very canny and know what's bad for them. They don't go near things that are questionable or could be dangerous and they are very aware of propellers.

"Why are seals going to something that could kill them, perhaps sucking them in and leaving them unable to get away?" 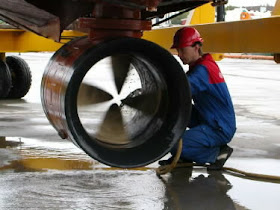 NOTE: I read the following today: The cuts on the seal are spiral in nature as if it has passed through the center of cutting blades? There is a system under design that is called a "Rim Driven Propulsor" and the word "propulsor" is correct not a "propeller" before pedantic souls start trying to correct me. If you can imagine a rim like a wheel with the blades pointing inwards and a hollow space in the center no hub, this design is possibly more efficient with less cavitation effect on the blades e.g. less noise. I would think it feasible for certain navy's to be testing this system on submarines or surface vessels hence no one owning up to the mysterious seal deaths please see the following link for an article about "Rim Driven Propulsors".

I made a few inquiries and was told that these systems are used on some newer yachts. As well, the U.S. and Russian Navies have been testing this design for a few years...Lon