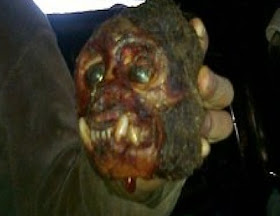 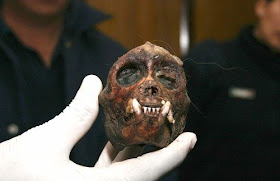 Scott Corrales of Inexplicata has posted the following strange article. As well, I did a bit of research on the folklore of the supposed creature (El Ucumar), particularly in the Patagonia region:

The legend of the Ucumar Zupai is reborn in a wilderness near El Creston, some 40 kilometers west of San Jose de Metan.

Farm owner and nephew had gone out to round up the cows when the strange specimen appeared.

Two ranchers in the vicinity of Cerro El Creston, some 40 kilometers west of San Jose de Metan, hunted down a strange creature of humanoid appearance, but with unusually large and sharp incisors.

The similarity between this specimen and local tales of the mythic “Ucumar” – the manlike figure covered in short black hair – has renewed the debate in Salta over the existence of the local “yeti”.

The presence of a creature having such characteristics has been news for decades in the forested areas to the south of the province, particularly in Rosario de la Frontera, where eyewitness accounts have been collected.

Photographs of the remains of the specimen gunned down in the cloud forest of Cerro El Creston were taken by Martin, a resident of Metan who did not wish to give his name, at the property belonging to the ranchers who shot it.

The photo – taken with a cell phone – clearly shows a hominid specimen with long fangs and protruding eyes.

The ranchers are an older man, 79, whose initials are J.S. and the other is his nephew, E.S. Both requested anonymity to ward off curiosity seekers.

Almost shyly, Martin told El Tribuno about his experience with the strange being during a visit to his friends the ranchers. “That Saturday I arrived and they told me what had occurred during the morning. I entered the home and there it was, hanging from its feet, its hands tied to one side and extending down to the floor.”

Unhurriedly, he continued his story: “I asked him what it was, and they couldn’t answer. They only said that in the dark of night, they thought it might have been a puma or a goblin, because they only saw its enormous green eyes shining by light of the flashlights.”

According to the young man, J.S. and E.S. had gone out on the evening of 23 July to round up cattle, as they were planning to brand the livestock on the following day.

Amid the darkness, they heard a nearly deafening sound on the edge of one of the hills surrounding their property. They cast light upon the source of the noise with the flashlight, and found themselves staring at two enormous green eyes that nearly froze their hearts. “They told me they thought it was a goblin, and to scare it away, they fired a shot. They were unlucky enough to hit it in the head.”

Apparently, the bullet entered through the lower left side of the jaw, exiting through the upper right eyebrow ridge. Due to this impact, the alleged “Ucumar” collapsed instantly. “The dogs that were with us, accustomed to finding wild pigs, ran toward the carcass, and when my friends chased them, they came across that thing.”

The two gauchos carried the remains back to their ranch to analyze it at length. The next day, with sunlight, there was no doubt about it: they had shot an Ucumar, although to confirm this, it would be necessary to go into deeper study. For the time being, all we have are speculations and suspicions.

What can indeed be confirmed is that the veterinary specialists consulted by El Tribuno state that the specimen “hunted” by accident is not native to the region.

Carcass Hurled Down a Canyon

Martin continued to relate his experiences with the ranchers of Cerro El Crestón. He noted that “On Saturday morning, J.S. asked us to cut off his head and throw the body far away, as he did not wish to be the victim of any revenge.”

The revenge that Martin referred to is that the being they had found was allegedly a “cub” of an Ucumar, which could take reprisals against him for having shot and killed its young.

The state that it was a “cub” due to the diameter of the specimen’s skull, which measured some 15 centimeters. They calculate the creature’s height at some 60 to 70 centimeters.

“Overall, the people who live in these parts believe greatly in these things: goblins, the Ucumar...matter of fact, I must admit I felt afraid. At one point I thought about bringing the body to Metán, but I got scared,” said the fellow who spoke with El Tribuno.

Martin explained that “we cut off its head, which remained at the ranch. But we wrapped up the body in several bags and threw it down a canyon.”

J.S. the owner of the ranch where the strange events transpired, lives alone in the area. His nearest neighbor is 15 kilometers away. The man is visited by his nephews every so often.

“It Had Fingers and Toes”

The witness who got to hold the body of the hunted hominid explained that “it was covered in short black hair all over its body, except for the face. It was impressive to see the size of its incisor.” He added that the manlike figure had fingers and toes.

“The truth is that it was a one of a kind experience. I had never seen anything like it. When we go to the ranch at Cerro El Creston, we find hairs stuck to the tree trunks, as though “it” was scratching itself against them. There are many animals in the area, but none with fur resembling that of the creature they hunted,” Martin explained.

Marcelo Choque, a forensic veterinarian for the Provincial Police under the Environmental Division of the service, was startled to see the photographs of the strange specimen’s skull, shot by a rancher in the heights of Cerro El Creston in Metán. “I never saw anything like it. It’s clearly an anthropomorphic figure, but I can’t tell you the species. And I could much less explain the exaggerated size of its incisors, which give it a monstrous appearance.”

The expert paused to think for a moment and continued. “There are no anthropoids in the are where they shot it. And the ones belonging to our fauna do not possess in any way the humanoid characteristics showing in the photo. If it is a monkey of some sort, it would be a rarity, an unclassified species or a genetic aberration. I’m stunned and I think it would be necessary to travel with a team of experts to the area where the skull is kept in order to conduct an analysis of the remains.”

NOTE: I found the second photo of this creature at Bajaron los restos del extraño animal cazado en el cerro El Crestón . There is record of a strange hominid in this area of South America, the legendary Ucumar or Ucu. I have posted some of the information below...Lon

The Legend of El Ucumar 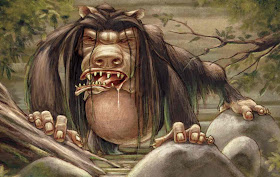 The Ucu, sometimes called Ucumar or Ukumar-zupai, is a reported Bigfoot like creature thought to live in the mountainous regions in and around Chili and Argentina. The Ucu is described to be the size of a large dog and walks erect, it is also thought to prefer the more tropical regions of the Andes mountain range. According to natives the Ucu likes to eat payo, a plant with an inside similar to cabbage, and emits a sound like uhu, uhu, uhu, which Ivan T. Sanderson compared to the noises reported by Albert Ostman, who claimed to have been held captive by a family of Sasquatch in 1924.

One of the first documented sightings of the Ucu took place in May of 1958 when a group of campers in Rengo, 50 miles from Santiago, Chili, reported that they saw what they could only describe as an ape man. Police were called out to investigate; they took reports from the witnesses, one of which was Carlos Manuel Soto who swore that he had seen an enormous man covered with hair in the Cordilleras, one of the Santiago’s 6 provinces.

In 1956, geologist Audio L. Pich found seventeen inch long human like footprints on the Argentina side of the Andes Mountains at a height of over sixteen thousand feet. The following year similar tracks where discovered in the province of La Salta, Argentina. Not long after, residents of Tolor Grande informed newspaper reporters of a nightly chorus of what they described as eerie calls emanating from the near by Curu-Curu Mountains. The cries, which where attributed by the locals to a creature known as the Ukumar-zupai, frightened the community for some time, and according to anthropologist Pablo Latapi Ortega, traditions of these giant ape men continue to this very day in Argentina.

The Evidence
To date no physical evidence of the Ucu has been brought to light, for evidence which pertains to a similar creature please refer to the Unknown Explorers page on Bigfoot.

The Sightings
In 1958, Carlos Manuel Soto witnessed what he described as an enormous man covered with hair in the Cordilleras, which is one of Santiago’s 6 provinces.

The Stats – (Where applicable)

Etymology: After its ululating call.

Variant names: Sachayoj, Ucu, Ukumar-zupai (in Tolar Grande). In Bolivia and Peru, the spectacled bear is known as Ucamari or Jucamari.

Possible explanation: The Spectacled bear (Tremarctos ornatus) is found in the Andes as far south as northern Argentina. Its occasional forays into Argentina could contribute to Ucumar folklore.

Sources:
www.unknownexplorers.com
newsodrome.com
www.eltribuno.info
www.phenomenica.com
Simon Chapman, The Monster of the Madidi: Searching for the Giant Ape of the Bolivian Jungle (London: Aurum, 2001)