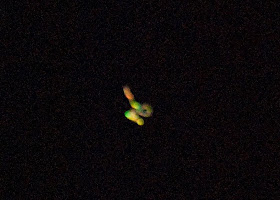 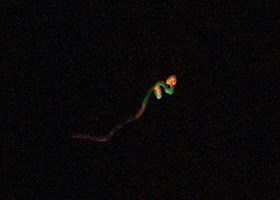 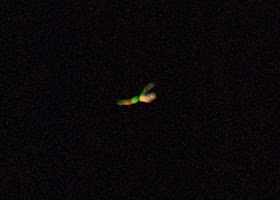 I received these images and anecdote from Bill S:

My wife, friend and 5 year old daughter were watching the sunset while on vacation at the Helmsley Hotel on Lido beach, Sarasota. I had grown up in Sarasota and was back visiting. My friend Scott, who btw had a private pilot's license had stopped by. We were staying on the second floor, facing the Gulf. The unit was, when you faced the Gulf, the last unit on the left, on the second floor. We noticed before the sun totally set, a bright light. It was at eye level or slightly above and to the left of us. My wife thought it was a craft. She was an Air Force brat, growing up on SAC bases, her father a retired Lt. Col. Scott speculated it was a helicopter. It just sat there, until well after dark. After dark, it was flashing all kind of colors, like you would not see from an airplane. Photography is my hobby. I had a Nikon DSLR with a telephoto lens. But I did not have a tripod. The lenses I use are stabilized. So I braced the lens and shot a bunch of photos after dark, when it was most dramatic. Some looked like a yellow or other color it was flashing pinpoint of light. Others showed a wide array colors is squiggly patterns. I did not see the object move from its position. Those photos may be from camera movement but do show that the object was flashing colors you would not see from a plane or helicopter. I was impossible to tell how far away it was, I would say far. It eventually faded. I don't know if it got farther away or if a fog or mist off the Gulf obscured it. We didn't see it any other night we were there, which to means it wasn't a star. Besides, the sun had set, the object was still there for probably a half an hour after the sun set. A star would have set too.

Later, I saw a show on the sightings in Tx. There was a similar photo taken. http://ufodisclosurecountdownclock.blogspot.com/2008/02/stephenville-ufo-sky-symbols-suspend.html It was of an object flashing different colored lights. The Naples sights, including the webcam image are of a bright light. Seeing the recent Capri island movie, it reminded me of the photos and sighting from the Spring of 2008. 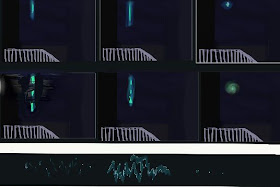 Here is a recent MUFON CMS report filed from Nova Scotia for a sighting on August 18, 2010 (unedited):

We were on our second night in Halifax Nova Scotia, sitting on our condo balcony in Lower Water Street, looking south at the sky between the buildings. We thought perhaps we were seeing some kind of fireworks or light display, when we saw the blue-green glowing light in the sky, but then noticed it did not move. Then it pulsed slightly and seemed to drip down upon itself almost like a lava lamp, and then broke into three even sections before our eyes. It stayed in the exact same spot, however, and came back together several times, continuing to glow with an odd greenish blue light for ten full minutes.

At the end of the event, it formed a ball of bluish green colored light and bounced up and down and all around very erratically. Eventually, it grew smaller in size and dimmer in appearance until it was gone altogether. My husband and I are skeptical and would like to know what it was that we saw, if there is in fact an earthly explanation.

We did not feel scared but felt amazed and awed by the object. It was also very beautiful because its light was glowing and looked very unearthly. We knew it was not a plane or helicopter and since it seemed not to be affected by the intermittent clouds (or lack there of) it was hard to imagine it was any kind of projection from below -- like a prank. To project something, one needs a screen of clouds or another surface to use and there was no consistent cloud cover that night. We could easily see stars around the object but it was too elongated / bar shaped to be any kind of planet or star. Since it was not moving and only seemed to pulsate and divide, it is hard to imagine it was any kind of human made craft.

The following MUFON CMS report was recently filed from an undisclosed location in Michigan from an incident on August 30, 2010 (unedited):

My 6 year old daughter woke up at approx 3am, saying there were aliens out side, I sorta brushed her off, but had her describe them, thinking they were just stars or something. She said they were in the field next to us.

I just told her it was fine, and go back to bed, and that I would check it out. (what every dad has to do right). So after a bit I went out side to check it out. I didn't really see anything other than Jupiter brighter than I'd ever seen before.

But that was on the other side of the house, she couldn't have seen that. The only thing interesting was what I thought was Mars, about the right size flashing red. I went back inside. She was standing in the living room waiting for me.

"Daddy the aliens still out there" I asked while I was out there. She said Yes. Now I knew for sure she had to just be seeing things.

I had her draw me a picture. she drew the dome first, I thought she was going to draw a cigar type but then but a disk on the bottom. I've never heard of anything like that, maybe you have. I drew another and asked if that was it. The pic is not scanned or I would send it now. this happened less that 2 hours ago.

Again I had her go back to bed, and told her it was fine and it would be ok. about 4:00am I checked on her, she was still awake. I had her point to where she saw this. She did and said there still out there.

Now I'm getting freaked. What the heck is she seeing?

I had her get up and told her were going outside. She didn't seem to want to, the whole time she was acting scared, which is very unlike her. As soon as we got out, she yelled there right there, all over the place, I'm like what are you seeing. "they are small now, by the stars." I said you are just seeing stars. She said, no these ones are moving all over. I thought satellites.

Then she pointed out what I thought was mars. "See it flashing and it's moving. I had moved quite a bit in the half hour or so sense I had been out there. I had moved from one side of the tree to the other in a half hour? I had the moon and Jupiter as reference, they hadn't moved that much. And it was flashing, not like a plane or like a twinkle. The white always on behind the red flash. this all was to the east.

I had asked her, she said that it had been close to the house and was much larger. and didn't know if what we were seeing was the one she saw close. about there being lost of them, I am understanding she thinks that all the other ones were above and could all have been on a bigger vessel, all she said about them was that they flashed. the lights on the smaller craft she said were almost of every color. red green yellow etc. and something about green and yellow at the same time. and said the dome was a yellowish green. I put her back to bed and googled this site.

5:27 and I'm already back and I'm spooked. I went out, was looking around and noticed the moon and Jupiter had moved. and as I looked at Jupiter I noticed there was 2 of them. I thought where did that star come from? I didn't see it earlier. It was just as bright, and if you have seen Jupiter like this you know what I meen, you notice it. Now 2 of them?

just as I thought that. The one that was not Jupiter began moving to the south and in about 10 seconds was gone. From the time I noticed it until the time it began to move was between 5 and ten seconds. Like it moved because I noticed it. this was bright white, almost a twin in every way to Jupiter.

You know that feeling, like your being watched? That's how I feel right now. I'm still curious but nervous at the same time. That's how my daughter felt. If I had a sixth sense I'd say these things are up to no good, it's just my feeling.

For perspective I'm a Christian and don't drink. I believe that this is possible. 1. because I've seen a metallic orb during the day before, and know for a fact what I saw and I've never seen humans create anything close to that. It was literally a ball of liquid mercury stationary in the sky for more than 15 min. i think that was 1998. Anyway If anything else happens, I'll write it down and get back with you, feel free to email me. 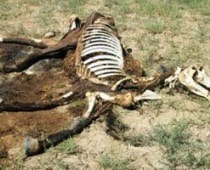 Two other ranch animals who apparently survived the attacks and were found with "unknown marks." A high "electro-magnetic field reading" was measured on an attacked dog. The rancher's wife reports unusual sounds two days prior to the discovered mutilations.

Rush is situated along Highway 94 in unincorporated El Paso County, two miles west of El Paso, and about one hour east of Colorado Springs.