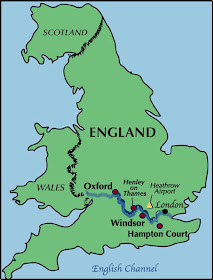 henleystandard - The "Black Wildcat of the Chilterns" saga continues.

Andrew Cleary, 45, was running between his home in Mill End and Dairy Lane when a large cat-like animal ran across his path.

He said: “Just a couple of feet in front of me this black animal went streaking across.

“It was much too big to be a house cat. It was about the size of a Labrador but it didn’t move anything like a dog. It moved like a cat and I could see its long tail as it disappeared into the bushes.”

Mr Cleary’s sighting brings the number in the past 12 years to 14 but he wasn’t aware of the previous ones because he only recently returned from four years in Columbia working as a teacher.

He said: “I have no thoughts one way or another as to whether all of these big cat rumours are true but I definitely saw something, so who knows?”

The sightings began in 1998 when there were several over a period of a few months in Goring, Stoke Row, Fawley, Ipsden and Woodcote.

A big cat was seen in Nuffield in 2001 and in 2005 a train driver reported seeing one near Wargrave station and a shopkeeper did the same in Binfield Health.

In 2006, an angler claimed to have seen a seven stone cat-like animal in Sonning Eye and another was reported at Nettlebed.

Last year, Nigel Spiers of Farm Road, Henley, described seeing a big cat at the roadside, Jane Alexander saw one in Nettlebed high street and rower Ben Lewis, 30, came across an animal on his morning run in Valley Road, Henley.

The “Wildcat of the Chilterns” has been spotted again.

The latest sighting was made by Nigel Spiers, who was driving to work early on Tuesday morning when he came across what he believes may have been a black panther.

He was in Greys Road just before Highlands Farm when he saw the creature sitting at the roadside.

Mr Spiers, 45, of Farm Road, Henley, said: “He was sitting down and just looking at me and didn’t seem at all bothered I was there. He just stood up, ducked his head and, with two loping strides, was through the hedge and into the field.”

He said the animal was about the size of a labrador.

“It was jet black,” said Mr Spiers. “I know my wildlife and it was not a dog. I am certain it was a big cat. It looked just like a panther. It had the most beautiful tail, which was like that of a cheetah, designed to help balance when running.”

Mr Spiers, a sash window renovator, said the animal could have been hunting rabbits.

He added: “I was aware that big cats like this had been seen before. My boss saw one once so I was not that surprised.”

There has been a catalogue of sightings of similar creatures in the area. In 1998, in the space of just a few months, there were reports of a panther-like animal in Goring, Stoke Row, Fawley, Ipsden and Woodcote.

In May 2001, one was spotted in Nuffield and in June 2005 a beige big cat was seen by a train driver near Wargrave station.

In the same month, the shopkeeper at Binfield Heath stores saw a big cat resembling a panther walking through the centre of the village and a woman spotted one a week earlier in Harpsden.

In September 2006, there were reports from Nettlebed and Sonning Eye, where an angler said the creature was larger than his 7st dog,

The last sighting before Tuesday’s was at Cookley Green when a large cat-like creature was seen jumping a stie by the B481.

“There has been quite a lot of activity in the area,” he said. “I am convinced these creatures are either panthers or black leopards.”

He advised anyone who came across a not to panic.

“Stand still and don’t run,” he said. “Avoid making eye contact and just slowly back away.”

Mr Westwood said it is possible the animals were kept in a private collection and had escaped.

There is no distinct species as black panther. The term is used to describe a number of wild black-coated cats, normally leopards or jaguars. They get their colour from excessive production of melanin and are normally found in the dense, tropical rain forests of south east Asia.