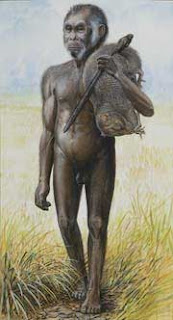 Some mythical creatures have their origin in tradition and tales from the distant past. However, each culture is associated with a multitude of interesting and odd creatures, many of these beings are humanoids. One of these legendary humanoids is the Ebu Gogo.

Ebu Gogo are a group of human-like creatures that appear in the mythology of the people of the island of Flores, Indonesia. In the Nage language of central Flores, ebu means 'grandmother' and gogo means 'he who eats anything'.

The Ebu Gogo are described as small, nasty people with a voracious appetite that sometimes included the devouring of the occasional human baby. Ebu Gogo have hair covered bodies, longish arms, big bellies and protruding ears. They were said to walk awkwardly and could be heard murmuring in their own language and were said to be capable of mimicking human speech. When they could tolerate the Ebu Gogo no more the Flores islanders drove the small people in the direction of the caves, perhaps near Liang Bau or perhaps they burned the survivors alive. In any case, these stories were probably told to keep truculent Flores children in line in much the same fashion as some western fairy tales are told.

Indonesian culture just like any other has folklore about ghosts, little people and mysterious beings. Word of mouth folktales are handed down from generation to generation. Indonesian village people would talk of an ape-like creature that walks like a man.

Some scientists believe that the Ebu Gogo folklore maybe a shared cultural memory of Homo floresiensis but there is no solid evidence to support that theory. However, legends have the Ebu Gogo disappearing about 400 years ago at the time of the arrival of the Dutch and Portuguese explorers. Scientists working on the Homo floresiensis find have also referred to the Ebu Gogo as 'Hobbits'. 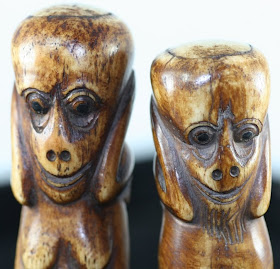 When I was back in Flores earlier this month we heard the most amazing tales of little, hairy people, whom they called Ebu Gogo - Ebu meaning grandmother and Gogo meaning 'he who eats anything'. The tales contained the most fabulous details - so detailed that you'd imagine there had to be a grain of truth in them.

One of the village elders told us that the Ebu Gogo ate everything raw, including vegetables, fruits, meat and, if they got the chance, even human meat.

When food was served to them they also ate the plates, made of pumpkin - the original guests from hell (or heaven, if you don't like washing up and don't mind replacing your dinner set every week).

The villagers say that the Ebu Gogo raided their crops, which they tolerated, but decided to chase them away when the Ebu Gogo stole - and ate - one of their babies.

They ran away with the baby to their cave which was at the foot of the local volcano, some tens of metres up a cliff face. The villagers offered them bales of dry grass as fodder, which they gratefully accepted.

A few days later, the villagers went back with a burning bale of grass which they tossed into the cave. Out ran the Ebu Gogo, singed but not fried, and were last seen heading west, in the direction of Liang Bua, where we found the Hobbit, as it happens.

When my colleague Gert van den Bergh first heard these stories a decade ago, which several of the villages around the volcano recount with only very minor changes in detail, he thought them no better than leprechaun tales until we unearthed the Hobbit. (I much prefer Ebu as the name of our find but my colleague Mike Morwood was insistent on Hobbit.)

The anatomical details in the legends are equally fascinating. They are described as about a metre tall, with long hair, pot bellies, ears that slightly stick out, a slightly awkward gait, and longish arms and fingers - both confirmed by our further finds this year.

They [the Ebu Gogo] murmured at each other and could repeat words [spoken by villagers] verbatim. For example, to 'here's some food', they would reply 'here's some food'. They could climb slender-girthed trees but, here's the rub, were never seen holding stone tools or anything similar, whereas we have lots of sophisticated artefacts in the H. floresiensis levels at Liang Bua. That's the only inconsistency with the Liang Bua evidence.

The women Ebu Gogo had extremely pendulous breasts, so long that they would throw them over their shoulders, which must have been quite a sight in full flight.

We did ask the villagers if they ever interbred with the Ebu Gogo. They vigorously denied this, but said that the women of Labuan Baju (a village at the far western end of Flores, better known as LBJ) had rather long breasts, so they must have done.

Poor LBJ must be the butt of jokes in Flores, rather like the Irish and Tasmanians.

A local eruption at Liang Bua (in western Flores) may have wiped out local hobbits around 12,000 years ago, but they could well have persisted much later in other parts of the island. The villagers said that the last hobbit was seen just before the village moved location, farther from the volcano, not long before the Dutch colonists settled in that part of central Flores, in the 19th century.

Do the Ebu Gogo still exist? It would be a hoot to search the last pockets of rainforest on the island. Not many such pockets exist, but who knows. At the very least, searching again for that lava cave, or others like it, should be done, because remains of hair only a few hundred years old, would surely survive, snagged on the cave walls or incorporated in deposits, and would be ideal for ancient DNA analyses.

Interestingly, we did find lumps of dirt with black hair in them this year in the Hobbit levels, but don't know yet if they're human or something else. We're getting DNA testing done, which we hope will be instructive. 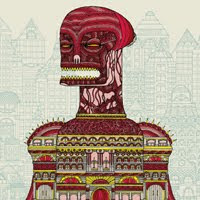 From December 2004 - smh - Chief Epiradus Dhoi Lewa has a strange tale to tell. Sitting in his bamboo and wooden home at the foot of an active volcano on the remote Indonesian island of Flores, he recalls how people from his village were able to capture a tiny woman with long, pendulous breasts three weeks ago.

"They said she was very little and very pretty," he says, holding his hand at waist height. "Some people saw her very close up."

The villagers of Boawae believe the strange woman came down from a cave on the steaming mountain where short, hairy people they call Ebu Gogo lived long ago.

"Maybe some Ebu Gogo are still there," the 70-year-old chief told the Herald through an interpreter in Boawae last week.

The locals' descriptions of Ebu Gogo as about a metre tall, with pot bellies and long arms match the features of a new species of human "hobbits" whose bones were recently unearthed by Australian and Indonesian researchers in a different part of Flores in a cave known as Liang Bua.

The unexpected discovery of this tiny Homo floresiensis, who existed until at least 12,000 years ago at Liang Bua, before being apparently wiped out by a volcanic eruption, was hailed as one of the most important archaeological finds in decades when it was announced in October.

The chief adds that the mysterious little woman in Boawae somehow "escaped" her captors, and the local police said they knew nothing of her existence when he quizzed them.

The prospect that some hobbits still exist in pockets of thick, fertile jungle on Flores is extremely unlikely, says Douglas Hobbs, a member of the team that discovered Homo floresiensis. But it is possible they survived near Boawae until 300 or so years ago, when the chief's ancestors moved into the area, he says.

The detailed stories that the villagers tell about the legendary Ebu Gogo on the volcano have convinced the Australian and Indonesian team to search for bones of hobbits in this cave when they return to the rugged island next year, says Hobbs, an emeritus archaeologist with the University of New England, who discussed excavation plans with the chief last week.

Getting to the cave on the 2100-metre-high Ebulobo volcano, however, will be no simple matter for the team led by Professor Mike Morwood of UNE. The blood of a pig must first be spilt in this society where Catholic faith is melded with animist beliefs and ancestor worship.

The sacrifice and the feast will please the ancestors and bring many villagers together to talk about the cave, says the chief, whose picture of his grandfather, the king, in traditional head-dress, sits framed on the wall next to images of Jesus.

If the right rituals are followed, "then we will be able to find the road to the hole again", he says.

A Dutch palaeontologist, Dr Gert van den Bergh, a member of the team, was first shown the cave at a distance more than a decade ago, after hearing folk tales of the Ebu Gogo, which means "grandmother who eats everything".

People living around the volcano told him a consistent story of the hairy creatures that devoured whatever they could grasp in their long fingers. The villagers tolerated the stealing of food until the Ebu Gogo began to snatch babies and eat them too. They then set upon the little people, forcing them out of the cave with bales of burning grass.

Van den Bergh dismissed the tales as akin to those of leprechauns and elves, until the hobbit bones were found.

While the search for more bones is being planned, a political furore has broken out after a leading Indonesian palaeoanthropologist - with no connection to the find - last week "borrowed" all the delicate remains from six hobbits found at Liang Bua against the wishes of local and Australian team members. Professor Teuku Jacob, of Gadjah Mada University, who has challenged the view that Homo floresiensis is a new species, had previously taken the skull and bones of the most complete specimen, a 30-year-old female hobbit, from the Indonesian Centre for Archaeology in Jakarta, where they had been kept.

Professor Morwood said it was wrong that the team who found the remains were unable to analyse them first. "It is not good for the Indonesian researchers nor their institution."

However, he said Professor Jacob had signed an agreement to return all the bones by January 1.