I received an email from a reader in Japan recently who asked if I had any knowledge of actual cryptid / humanoid encounter reports or activity in his country. He stated that there were hundreds of spirit sightings and ghost legends...but he rarely heard of people encountering unknown creatures. It was an intriguing challenge...so I promised to conduct some research and post my findings. The following anecdotes and stories are a few interesting accounts:

A FOREIGN WOMAN IN THE HOLLOW BOAT 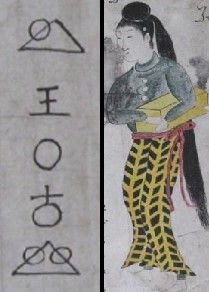 Possibly the first written account referencing alien symbols and a possible humanoid encounter is a story in Japanese folklore. The story takes place on February 22nd in the spring of 1803. Offshore from a beach called Hara-yadori in the territory of Ogasawara Etchuu-no-kami (4000 koku'), who occupied a position named "Yoriai-seki" of Tokagawa shogunate at that time, a kind of boat was observed from the beach. People approached this boat using their small boats and eventually caught it. They towed it to the beach.

The boat was round and resembled a kind of kou-hako (a box used to burn incense). Its diameter was more than 3 ken (5.45 in). On the upper part of the boat, there were glass-fitted shoji (windows with lattice) and they were shielded by chan (a kind of waterproofed putty made from pine-tree gum). The bottom of this ship was reinforced by separated iron plates. This structure may protect the boat from destruction by sunken rocks. Since the glass-fitted shoji was transparent, the people could see the inside the boat, where they found a woman with strange features. Her hair and eyebrows were red, and her face was pink. It seemed that long white hair was added to her original hair.

This foreign woman held one square box whose size was about two shaku (60 cm) in her hands. It seemed that this box was very important to her because she held this box constantly, and she prohibited anyone from approaching it.

The objects found in this boat were investigated by the people. There was about two shou (3.6 liters) of water in the small bottle. There were two pieces of carpet, cake-like food, and kneaded meat. While people discussed what to do about this boat, the woman observed them peacefully.

Another similar description of an incident was found:

On March 24, 1803, a strange boat drifted ashore on a beach named Haratono-hama in Hitachi state in Japan. The boat was hollow and its shape was similar to a rice-cooking pot. It had a kind of rimmed-edge at the center-level part of the boat. In the part above this edge, the boat was painted in black and had four small windows on four sides. All shoji (windows with lattice) were shielded by chan (a kind of waterproof putty made from pine-tree gum). The lower part of the boat was reinforced by steel bars. These bars looked to be made of Western-made iron of the highest quality. The height of the boat was one jyou, two shaku (3.64m) and its diameter was one jyou, eight shaku (5.45m).

A woman (or girl) was found inside this boat and her age appeared around twenty. She was about five shaku (1.5m) tall and her skin was white as snow. Her long hair vividly hung on her back. Her facial features were incomparably beautiful. Her clothes were strange and unrecognizable and her language was not understood by anyone. She held a small box in her hands and prohibited anyone from approaching this box.

Reports of small wolf-like canids came out of the Chichibu district of Japan in 1998. At least seventy people reported wolf howls in 1994, and there have been at least twenty-six claims of wolves seen from 1908 to 1978, all in the Aomori and Oita regions in northernmost Japan, not to mention prints, howls and scat. Several sightings have also been made on the Kii peninsula. In 1936a man in Hongu supposedly captured a wolf pup, but released it in case a parent attempted to retrieve it. The Honshu wolf (Canis lupus hodophylax) a dwarf subspecies of wolf just over a foot tall and deemed extinct since 1905 due to a rabies epidemic, fits the general description. Attempts to record wolves howling, by playing wolf howls to prompt them in 1995 were unsuccessful. Possibly these sightings are just misidentification of feral dogs. However, though Japan is heavily populated, its mountainous terrain would make it possible for a hidden population of wolves – in this case, small wolves - to survive without public acknowledgment. - Cryptid Canids

At around 11 PM on August 1, 1984 in the town of Tsushima in Nagasaki prefecture, a squid fisherman named Ryu Shirozaki was walking home from the local pier after work. As he passed near the Kuta river, he came upon a small group of children playing at the water's edge. While it was not entirely uncommon to encounter people fishing in the river at night, it was rather surprising to see youngsters there.

As Shirozaki approached the children, he was struck by how bizarre they appeared in the moonlight. He could make out swarthy faces, unusually spindly arms and legs, and glistening skin. Suspicious, Shirozaki called out to them as he neared, but they seemed startled and quickly disappeared into the water.

The next morning when he returned to the same spot, Shirozaki discovered a set of moist, teardrop-shaped footprints on the nearby pavement. The prints, which appeared to consist of a slimy substance that had begun to coagulate under the hot morning sun, stretched for about 20 meters. Each footprint measured 22 centimeters (about 10 in) long and 12 centimeters (5 in) wide, and they were spaced about 50 to 60 centimeters (about 2 ft) apart.

When police forensic investigators arrived on the scene, they determined that the slimy footprints consisted of an unknown secretion. They took a sample to the lab for analysis, but the results unfortunately turned out to be inconclusive because the sample was too small. The police eventually dropped their investigation, and the mystery of the slimy footprints was never solved.

Another recent kappa encounter occurred on June 30, 1991 in the town of Saito in Miyazaki prefecture, when an office worker named Mitsugu Matsumoto and his wife Junko returned home for the evening. Upon opening the front door, the Matsumotos were confronted with a strange smell inside their home. Inside, they found dozens of small, wet footprints around the front door and in the hallway, bathroom, and two tatami rooms. At first they suspected a burglar, but they soon realized nothing had been stolen.

The police briefly surveyed the house, but found nothing except a floor soiled by 30 footprints, each measuring about 7 centimeters long and 6 centimeters wide, and having 4 or 5 toes. To Matsumoto, the footprints did not look human, nor did they appear to belong to any animal he could imagine.

Later that night, as Mrs. Matsumoto was putting laundry away, she discovered an unusual orange stain on some clothing. The next morning, as Matsumoto inspected the house more closely, he discovered a deposit of orange liquid on the portable stereo in the tatami room. He took a sample to the local public health center for analysis, and the results indicated the liquid had an extremely high iron content and a chemical composition resembling spring water.

Troubled by the incident, Matsumoto decided to visit a shaman. After listening to Matsumoto's story, the shaman encouraged him not to worry, explaining that the kappa indigenous to the nearby swamp enjoyed playing the occasional prank on local residents. The kappa were harmless, the shaman told him.

Harmless, perhaps, but Matsumoto found the kappa difficult to clean up after. He tried using detergent, paint thinner and gasoline to remove the footprints and orange stains, but nothing seemed to work. 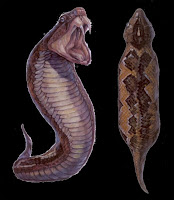 In 2000, Yoshii, Okayama, Japan was in the news, as people were flocking to the region to hunt for the tsuchinoko, a chirping reptile-like cryptid bearing at least some resemblance to a snake or a long, thick lizard. A 20 million yen reward from the Yoshii Municipal Government was the source of all the excitement.

Tsuchinoko fever hit Yoshii on May 21 after a farmer cutting grass swore he saw a snake-like creature with a face resembling the cartoon cat Doraemon slither across his field. The farmer slashed the creature with his weed whipper, but it fled into a nearby stream and escaped. Four days later, 72-year-old Hideko Takashima was talking with a couple of friends in Yoshii when she found what she thought was one of the creatures lying dead next to the stream a tsuchinoko reportedly had dived into to escape from the farmer. She picked it up and buried it.

Yoshii Municipal Government officials heard the rumors of a tsuchinoko and headed out to look over the local woman’s find. They exhumed the body and forwarded it to Kawasaki University of Medical Welfare to be examined. Kuniyasu Sato, the professor who analyzed the reptile, said that the animal may indeed have been the tsuchinoko, but “scientifically speaking, it was a kind of snake.”

Meanwhile, Mitsuko Arima, an 82-year-old from Yoshii, says she saw a Tsuchinoko swimming along a river on the morning of June 15.

“I was surprised. I just pointed at it and asked ‘Who are you? Who are you?’ It didn’t answer me, but just stared. It had a round face and didn’t take its eyes off me. I can still see the eyes now. They were big and round and it looked like they were floating on the water,” Arima says. “I’ve lived over 80 years, but I’d never seen anything like that in my life.” - The Top Cryptozoology Stories of 2000

NOTE: there are a few links that may also be of interest Zuiyo Maru Cryptid and The Yamapikarya – Japan’s Mystery Cat Also, below is an interesting humanoid report that I thought I'd throw in here...Lon

Between 6 p.m. and 7 p.m., two seven-year-old boys named Kono and Yamahata watched a luminous orange UFO approach Kofu, Japan while making a "ticking" sound. It landed on three ball-shaped legs in a nearby vineyard. The object was a domed disc, five meters in diameter and six feet high. The boys got very close to it, and discovered the surface of the object was silver colored and had strange characters embossed on its surface.

A ladder extended out of the craft down to the ground, and a humanoid creature slightly over four feet tall disembarked. It wore a silver uniform and carried something that looked like a gun. His skin was dark brown and he had large pointed ears, but his large head had no facial features: no eyes, nose or mouth. It merely had wrinkles on the "face" and three silvery two-inch long "fangs" where the mouth should be. Both boys could see one more smaller humanoid in the cockpit. The being that had emerged reached out and touched one of the boys, patting him twice on the shoulder and uttering words "like a tape recorder running backwards." The boy who had been touched sat down, paralyzed either by the touch or fear, but his companion took him on his back and carried him from the vineyard. They then ran to one of the boy's homes and informed their parents, who could at first see the orange light pulsating in the vineyard. Then it disappeared as they watched. Two concrete posts were found pushed over at the landing site. 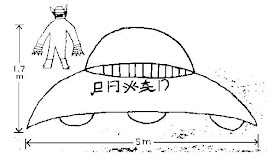