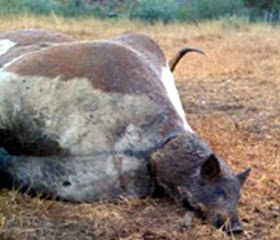 zimdiaspora - A Zimbabwean farmer was left stunned when his cow gave birth to a piglet, it has been reported.

The farmer, Mr Tinos Mberi of Chatsworth in Masvingo eastern highlands of the country said he could not believe his eyes when he saw the strange animal.

He said it was impossible for a pig to mate with a cow.

“The whole body and size was that of a piglet. The nose and mouth was like that of a pig, except that it did not have a hairy body,” said Mr Mberi.

He said it was difficult to attribute the strange occurrence to anything other than witchcraft.

He said this was the first time that his cow has given birth and he had not expected what he got.

The Masvingo Provincial Veterinary Officer, Dr Ernest Dzimwasha, said there was nothing unusual about the incident although it was rare.

“It was simply a deformed calf that looked like a pig. Some deformed calves may look like monsters and we also have some that are known as bulldog-calves.

“These may look like a bulldog but it’s all due to deformities, just like in human beings,” he explained.

Triceratops May 'Never Have Existed'

dailymail - It is one of the most recognisable dinosaurs, part of the Holy Trinity of childhood favourites alongside the brontosaurus and the mighty T-Rex.

But now scientists say that the fearsome three-horned triceratops may never have existed.

Instead new research has raised the possibility that the triceratops was just a young version of a different dinosaur known as a torosaurus.

John Scannella and Jack Horner at the Museum of the Rockies in Bozeman, Montana analysed skulls from dinosaurs that had been classified as triceratops and torosaurus.

Both animals had three horns but at different angles and the torosaurus’ neck-frill was thinner, smoother and had two holes in it.

But the researchers say that the triceratops was just a young version of a torosaurus and its horns changed shape as the dinosaur aged.

When it reached maturity the holes developed in its neck-frill.

The research, which appeared in the Journal of Vertebrate Paleontology, says that the neck-frill and horns changed shape as the animal aged because they were spongy and would not harden until the dinosaur was an adult.

Scannella says. ‘Even in the most mature specimens that we've examined, there is evidence that the skull was still undergoing dramatic changes at the time of death.'

The researchers looked at 9 triceratops skulls and nine torosaurus skulls, which are far rarer.

They discovered that the oldest triceratops skulls showed that thinning in the neck-frill bone where the holes of the torosaurus would eventually appear.

The finding casts doubt on previous theories that the frill on the triceratops was used as a defensive mechanism. Instead it was probably used to display the animal’s maturity, Scannella told New Scientist.

All torosaurus specimens will now be reclassified as triceratops, the scientists said.

in 1903 it was discovered that the brontosaurus was actually a juvenile version of an Apatosaurus, a species that had already been discovered.

In 1877, palaeontologist Othniel Charles Marsh discovered a partial skeleton of what turned out to be a juvenile Apatosaurus.

Two years later, he discovered an intact skeleton of a much larger animal, minus the skull. He added a skull found nearby and named the new animal Brontosaurus (Thunder Lizard).

It later emerged he had taken the head of a Camarasaurus and placed it onto the body of a mature Apatosaurus.

The error was not discovered until 1975.

Beam Me Up, Scotty

npr - "Quantum entanglement" may sound like an awful sci-fi romance flick, but it's actually a phenomenon that physicists say may someday lead to the ability to teleport an object all the way across the galaxy instantly.

It's not exactly the Star Trek version of teleportation, where an object disappears then reappears somewhere else. Rather, it "entangles" two different atoms so that one atom inherits the properties of another.

"According to the quantum theory, everything vibrates," theoretical physicist Michio Kaku tells NPR's Guy Raz. Kaku is a frequent guest on the Science and Discovery channels. "When two electrons are placed close together, they vibrate in unison. When you separate them, that's when all the fireworks start."

This is where quantum entanglement — sometimes described as "teleportation" — begins. "An invisible umbilical cord emerges connecting these two electrons. And you can separate them by as much as a galaxy if you want. Then, if you vibrate one of them, somehow on the other end of the galaxy the other electron knows that its partner is being jiggled."

This process happens even faster than the speed of light, physicists say.

Quantum entanglement isn't a new idea — Einstein once famously referred to it as "spooky action at a distance" — but it wasn't until the past 30 years that scientists were first able to observe this process.

It could one day lead to new types of computers, and some even think entanglement may explain things like telepathy. Scientists aren't quite ready to beam up Scotty yet, but this is the technology that one day may lead to such a feat.

Mirrors and lenses direct lasers at atoms to catalyze entanglement.

The work is being pioneered at places like the Joint Quantum Institute at the University of Maryland. In a basement lab, scientist Christopher Monroe has successfully managed to "entangle" two atoms approximately one meter away from each other.

"It's fun being on the fringe," Monroe says. "This discipline, we don't know where it's going. And that drives me every day."

But Monroe's work is a long way from being able to teleport a living being. The problem with such an act, Kaku says, is that "you have to be destroyed in order to have your body teleported to the other side of the room. So if you've been destroyed and teleported, then who is that person there? They have the same memory, the same jokes, the same everything, except the original was destroyed in the process of being teleported."

So if one was to be teleported, would he or she simply be re-created but not able to tell the difference? Stay tuned to the Joint Quantum Institute website to see if they ask for volunteers.

Fearing Sister-In-Law is a Witch, Man Chops Off Her Tongue

ptinews - Acting on the diktat of a community panchayat, a man chopped off the tongue of his sister-in-law on the suspicion that she was practising witchcraft in Kyorpur area, police said here.

Sahdeo chopped off the tongue of his sister-in-law Jageshwari on the diktat of the community panchayat in Karhaiya village yesterday, Superintendent of Police Pritinder Singh said.

Sahdeo's daughter Sonia (4), who was ailing for the last few months, died on Sunday. Some exorcists told Sahdeo that Jogeshwari was responsible for Sonia's death as her tongue was in grip of evil spirits, he said.

The exorcists threatened Sahdeo that if Jogeshwari's tongue was not chopped off his second daughter would also die.

Sahdeo later took the matter before the community panchayat, which held Jogeshwari guilty and ordered to chop off her tongue.

NOTE: I bet this guy's mother-in-law ran for the hills...Lon

Us 'Star Wars' Fans Can Appreciate This One.....