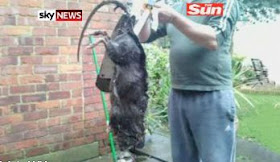 sky - Wildlife experts have said reports of a colony of giant rats need to be investigated after a huge rodent was shot dead on a West Yorkshire housing estate.

The culled super rat measured 30in (2.5ft) - making it as big as a bulldog - and twice the size of a normal rat.

Experts believe it could be a descendent of the coypu species, a large South American rodent not seen in Britain for two decades.

Brandon Goddard, 31, who shot the rat, said voluminous vermin have been invading homes on the Ravenscliffe estate in Bradford.

He saw four others of the same size as he fired on the group with an air rifle.

Mr Goddard told The Sun: "They were more like Ratzillas than rats.

"I got out of there as fast as I could. Who knows how many there will be if they've been breeding?"

Brandon, a manager at a cleaning firm, said: "The first went right past, but we got the second one. Then three more got away.

"I've seen thousands of rats during the course of my work and go shooting a couple of times a week. But I've never seen any as big as this.

"The one I shot was absolutely terrifying. I was shaking. Goodness knows where the others went. I'm glad I don't live there."

People living on the Ravenscliffe estate said large rats often invade their homes and council officials have been called out to eradicate the problem.

Thanks to Anthony for the heads up!

stv - A UFO-based religious sect are preparing for a pilgrimage to a Cairngorms peak in a bid to meet some higher beings.

Members of the Aetherius Society will trek to Creag-an-Leth-Chain this month to visit one of their "shrines". They believe the mountain is charged with spiritual energy by a "Lord of Karma".

The disciples of the sect, founded in 1955 by former London cabbie Dr George King, will then take their new found energy on the next stage of their pilgrimage - to Ben Macdhui.

At the peak they believe they will come face to face with members of "The Spiritual Hierarchy of Earth - once human beings who have cheated death by reaching a higher state of being.

Dr King founded the group in 1955 after he claimed to have been visited by aliens from Venus and Mars. He then relayed this energy to 19 mountains of religious significance around the world, including Creag-an-Leth-Chain.

David Trimble, 71, will be leading the exhibition on August 28 and has welcomed any followers from the local community to join them when they pray for the end of global warming and world peace.

He said: ""When we get up to the top we will be using a service called the 12 blessings.
It is an extension of Jesus' Sermon on the Mount which the cosmic beings delivered through Dr King's voicebox as he was in a higher yogic trance.

"We use this process and when we are on top of Creag-an-Leth-Chain we are able to tap into an incredible amount of energy."

Mr Trimble then hopes the ascend to the next peak will be repaid with a meeting with the higher beings.

He said: "They are people who have gone through a process of ascension and they have decided to stay on Earth to help out the human race."

Mr Trimble also revealed his interest in UFOs and extra terrestrials came from his childhood when his parents revealed their own experiences.

He added: "My father was on a shoot and saw some UFOs flying over the front line of the shooting party. My wife's mother had a similar experience when she was in the Bahamas and a craft came down to her eye level and she saw a smiling face in a window of the UFO."

BBC - Warnings have been issued to Scottish aircraft after a bird of prey, which can soar at up to 37,000 feet, went missing.

The Rueppell's Griffon Vulture was flying in a display in Cumbernauld when it was caught in a gust of wind.

Its handlers at the World of Wings centre could only watch as their star attraction soared high in to the sky.

It is feared the seven-year-old female, named Gandalf, could pose a threat to aircraft.

David Ritchie, director of the centre, said: "These birds can soar higher than any other in the world, and have recorded heights of over 36,000 feet.

"Gandalf is an absolute monster bird with a 10-and-a-half foot wingspan. She poses a genuine threat to airplanes."

The bird has been the star at the centre since 2006, when she was brought from Africa as part of a breeding programme.

World of Wings specialises in promoting the plight of vultures, which are becoming increasingly endangered.

Rueppell's Griffon Vultures are native throughout the Sahel region of central Africa but the current population of 30,000 is in decline due to ongoing loss of habitat and other pressures.

Along with other birds, Gandalf is let loose to fly every day for members of the public, to show the birds "in their full glory".
Airport alert

Mr Ritchie also said: "She was taking part in her daily display and started to soar. She got caught in the wind and just went higher and higher until she disappeared.

"We would warn people not to approach her but to call the police. She has no fear of humans and she could give someone a very severe bite. Her beak is designed to tear flesh apart."

Scottish airports, the police, the Scottish SPCA, Edinburgh Zoo and Blair Drummond safari park have all been informed.

National Air Traffic Services confirmed that pilots taking off and landing at Scottish airports have been warned about the vulture.

A spokeswoman for the Civil Aviation Authority said: "It can be quite serious. All the operators in the area have been notified."

A spokesman at Cumbernauld Airport said: "With a wingspan of 10ft, it could do a lot of damage to a large aircraft. But it's also half the size of some of our small training aircraft and it could take one of them, or even a helicopter, right out."

guardian - A Saudi judge has asked several hospitals whether they would punitively damage a man's spinal cord after he was convicted of attacking another man with a cleaver and paralysing him, local newspapers reported today.

Saudi Arabia enforces strict sharia law and occasionally metes out punishments based on the ancient code of an eye for an eye.

Abdul-Aziz al-Mutairi, 22, was left paralysed after a fight more than two years ago, and asked a judge to impose an equivalent punishment on his attacker under sharia law, reports said.

The newspaper Okaz said the judge in northwestern Tabuk province, identified as Saoud bin Suleiman al-Youssef, asked at least two hospitals for a medical opinion on whether surgeons could render the attacker's spinal cord nonfunctional.

The attacker, who was not identified, has spent seven months in jail. The reports cited the letter of response from one of the hospitals and the victim.

Two of the hospitals involved and the court were closed for the Saudi weekend beginning today and could not be reached for comment.

Okaz reported that a leading hospital in Riyadh – King Faisal specialist hospital – said that it would not do the operation. The article quoted a letter from the hospital saying "inflicting such harm is not possible", apparently refusing on ethical grounds.

The story was also reported by Saudi English-language paper Arab News, though neither paper carried any response from a second hospital that reportedly received the request, King Khaled hospital in Tabuk province.

Sharia law in Saudi Arabia allows defendants to ask for a similar punishment to harms inflicted on them. Cutting off the hands of thieves, for example, is common.

Under the law, the victim can receive blood money to settle the case.

Those who are sentenced to death are often not informed of the progress of legal proceedings against them, or of the date of execution until the morning on which they are taken out and beheaded.

The headless body can then be crucified in a public place as a way to set an example, according to the kingdom's strict interpretation of Islam.

Saudi Arabia's King Abdullah has been trying to clamp down on extremist ideology, including unauthorised clerics issuing odd religious decrees.