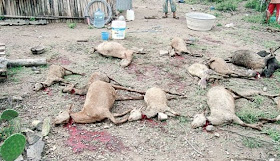 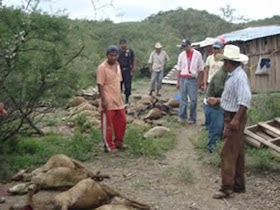 Thanks to Scott Corrales of Inexplicata for the following reports:

Mexico: The Chupacabras in Puebla and Guanajuato, Mexico - Over 300 Goats Decapitated

Shepherds from various communities in Puebla State are frightened by the attacks to their herds. They suspect the presence of natural predator, a nahual (shapeshifter) or the Chupacabras. Authorities have combed the area.

Shepherds from Colonia San Martín, Los Reyes Metzontla and Cañada Ancha in Puebla State are frightened by the attacks on their flocks by either the Chupacabras, wild dogs or some other wild creature that they’ve been unable to hunt down, and which has caused the deaths of over 300 goats for some 50 days now.

Felix Martinez Hernández, president of Colonia San Martin, said that on August 14th at around 7:00 a.m., over 36 goats were found butchered in the Colonia San Martin strip, located 18 km south of the municipality. The presence of a predator, nahual or the Chupacabras is suspected.

People who live in the community explained that the phenomenon increased after the rains, and this led them to seek support from the authorities in dispelling the mystery, which has people frightened due to the cruel way in which the goats were dispatched.

Anacleto Enrique Montiel Barbosa spoke of his concerns, acknowledging his fear over what is occurring in Zapotitlán: In this community, in the southern reaches of the state, most families owning this sort of livestock have been affected.

According to Anacleto, he first heard gunshots originating on his terrain, where he kept over 120 goats in a pen, “supposedly secure”. Upon reaching the site, he saw his fellow shepherd, Alvaro Mendoza, firing a rifle against some “dogs” that were fleeing the area.

Other residents arrived to see what was going on. They found that over 36 animals had been beheaded in a strange way and furthermore, without a single drop of blood in evidence.

Local authorities under commander Leonardo García Sánchez combed the area in order to find the goat slayers, but only managed to catch two dogs. The locals killed the dogs, opened them up and found that they did not contain any traces of goat blood or flesh. This caused them to recall the legend of the nahual. 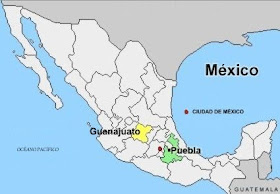 The Secretariat of Agriculture, Livestock, Rural Development, Fishing and Food (SAGARAPA, in Spanish) has not received any reports on the goat deaths. However, in coming days, the Animal Development and Health Committee may look into the matter.

The sudden appearance of these animals displaying signs of violence has given rise to speculation. In the next few days, experts may determine the cause of the deaths. They will look for substances in the flesh or the blood, says Ignacio Carrasco Sandoval, the federal regional district head: “While the agency only intervenes in cases involving death by illness, what the peasants have stated up to now [appears to involve] feline attacks. If so, the agency would have no further involvement as such.”

Concern among the locals increased. Since Monday, bands of peasants were formed to monitor the communities.

Last weekend, a peasant reported the presence of some tigers, or something similar. He advised the authorities and the town to conduct watches during the night and the morning hours. Locals were also urged to look after their families, advising them to refrain from going outside after 8:00 p.m., when natural light fades in the rural areas. Local watches commenced in the rancherías of San Martin, Los Reyes Mazontla, La Meza and others. Their members state their unwillingness to lose more cattle, and are willing to face down the nahuales, or whatever is involved.

Animals of the Night

According to legend, the nahual changes its human form for a given time to acquire the form a chosen animal. The nahual can only transmogrify at night, attacking our children with infernal spells.

In the area of Los Tuxtlas there is a long-held belief in nahuales. It is said that some people can turn into birds and are endowed with the power of flight. The nahual can have several protecting spirits, much like North American natives. To this time, there is no scientific evidence of the existence of nahuales.

The Chupacabras in Puebla?

Felix Martínez Hernández reported that the attacks cause concern among locals by affecting their livelihood. He indicates that the affected shepherds are calling for an investigation to trap the animals that have caused the goats’ deaths, and that officialdom should compensate them for their losses. “There are no signs of robbery during the attacks, no cases involving revenge, and therefore that can be discarded. We want this to stop, because people don’t want any more losses.”

Moreover, Eliseo Barragán Guevara, who has suffered the loss of 62 goats, all with bites to the neck, explained: “They were killed at night, because I arrived in the morning and they were all scattered, with bite marks, and 10 goats had head injuries. It looks like dogs were involved, but not normal ones. Perhaps wild ones or something, because judging by the wounds inflicted, they had long fangs.”

Cattle attacks were also reported in another Mexican state, this time in March 2010. In Yuriria, Guanajuato, shepherds discussed their experiences on television.

Puerto Rico: The Gargoyle vs. The Chupacabras

The Gargoyle vs. The Chupacabras

A strange creature with wings resembling those of a bat and which has been dubbed “the Gargoyle” has attacked several animals and even a human, according to reports issued by residents of Guánica.

Attacks by the “Gargoyle” resemble those of the mythic Chupacabras to a certain extent, given that it operates under cover of darkness and allegedly exsanguinates its victims.

Some people have identified it with the Chupacabras, yet others believe it is a differnt, elusive and sinister entity whose lair is in Barrio Ensenada, amid the ruins and tunnels of the Guanica Sugar Mill, where the skeletons of its victims can be found.

The Gargoyle’s exploits have gone on for many years, mostly in Guánica, but in Lajas and San Germán as well.

The creature has been seen by people who have opted to avoid making formal complaints to the Police, fearing they’ll be considered mentally disturbed or subjected to scorn. With the exception of one policeman and a schoolteacher who researchers strange phenomena, the other parties involved refused authorization to disclose their names.

A gargoyle is a mythic entity, a mixture of human and bird, represented by stone statues. These are placed on the cornises of cathedrals and other buildings.

A Human Is Attacked

“He was injured in his stomach, his [abdominal] fat could be seen,” noted a witness, describing the injuries suffered by a man on his belly and back, caused as if by “an animal’s claws.”

The witness soberly expalined that the wounded man lifted the t-shirt he put on after the attack, saying that a “large winged” animal took him by surprise in his back yard and attacked him.

The injured party, surnamed Valdo, also spoke to policemen patrolling the area where the attack took place, near Guánica Lagoon, in the mid-1990s.

Police officer Miguel Negrón states that he has not seen what is popularly referred to as the gargoyle, but two months ago, while patrolling the area with another officer near the old Guánica Sugar Mill, he heard the beating of powerful wings, as if something was propelling itself off the zinc roof of one of the mill’s cranes.

Agent Negrón indicated that some describe the gargoyle as a very large bird, emitting a sulfuric or rotten odor. It feeds on live animals like dogs, cats and horses, draining their blood and leaving them dry.

The creature goes forth at night or in the early morning hours, and for this reason there are few sightings. There are no photos or videos of the phenomenon, which attacks healthy animals, unlike a predator that seeks out sick or feeble animals.

Thanks again to Scott Corrales at Inexplicata