thewestmorlandgazette - A team of monster hunters will set sail on Windermere in a fresh search for ‘Bownessie’.

Lakeland hotelier Thomas ‘The Gladiator’ Noblett and celebrity psychic Dean ‘Midas’ Maynard will embark on their second journey into the depths of Windermere in search of the fabled monster.

The two men led a team of investigators to the lake to look for evidence last year but returned empty handed.

“Since last year, a lot of local people have told me they have felt something in the lake but have been too scared to say anything,” said Mr Noblett, owner of the Langdale Chase Hotel.

“There is obviously something large in there. You just have to look at the depth, width and length of it to know that.”

Bownessie was first spotted by tourist Steve Burnip in 2006. Mr Burnip described a serpent like creature, around 15-feet in length, at the north end of the lake.

Mr Noblett was prompted to prove the existence of the creature when he was hit by a three-foot wave whilst swimming on Windermere last year.

“A lot of people boo-hoo it but they are mainly people who have never set foot in the Lakes,” said Mr Noblett.

“Those who have seen it describe it as a very long and eel-like. One sailor told me he saw what looked like a big slab of meat roll past his boat and disappear underneath the boat.

“It could be a very large catfish that has just grown to be really big. Some of those fish do live for a very long time.”

Mr Noblett and his crew of three will set out on a £300,000 yacht using sonar equipment to try and track Bownessie.

They will explore the deepest part of the lake and sail to a spot near Gummers Howe, where the creature was snapped by Winderemere photographer Linden Adams in 2007.

“Whenever I swim across the lake I always get the heebys jeebies at that part. There is a real eerie feeling around there.”

Mr Maynard said: "The last Bownessie investigation was very memorable and we are hoping to have the same if not better results this time around.

"Since last year I have been contacted by many members of the public who have told me that they have also witnessed seeing something large in the lake over the past few years and we hope to get more evidence to back up these claims."

The Bownessie hunters will set sail on September 11.

NOTE: I have been watching this story develop for about 3 years. Frankly, I think this 'cryptid' is a tourist grab for the Langdale Chase Hotel. Why? Well, in 2008 I was asked by a LakesTV representative to publish the screen captures from the original video (above) on my blog. The video was located on the LakesTV website at the time. I asked if I could use the video and was denied...I was told that they wanted to 'market the video and it would be copyrighted'. I declined to publish the screen captures and decided to wait until something else popped up on this 'creature'. Then in July 2009, the owner of the hotel, Thomas Noblett, conveniently experienced a rogue wave while swimming in the lake. I rarely pass judgment on a sighting or encounter, but this particular saga doesn't pass the smell test. It could very well be a large eel or fish...but using the 'Nessie' moniker as part of a name is somewhat disingenuous. Anyway, you make your own determination on this 'cryptid'...Lon 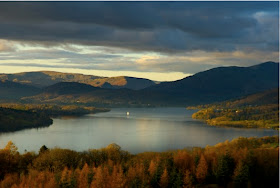 thewestmorlandgazette.co.uk - A team of investigators will scour Windermere in a hunt for a legendary monster that is claimed to lurk in its deep waters.

The search follows years of reported sightings of a big creature in the lake, the most recent being in July when Lake District hotelier Thomas Noblett was hit by a three-foot wave as he was swimming.

A chartered boat will take to England’s longest lake on September 19 with celebrity and sports psychic Dean Maynard at the helm. He will be joined by Windermere photographer Linden Adams who claims to have seen ‘Bownessie’ – the nickname for the monster – from a viewpoint on Gummers How in 2007.

There will also be people with cameras dotted around the shoreline to capture any unusual activity.

“Linden Adams and I are really geared up and ready for the challenge ahead and we hope to find some concrete evidence something big does exist in the lake," said Mr Maynard.

In 2006 The Westmorland Gazette reported how Huddersfield University journalism lecturer Steve Burnip, of Hebden Bridge, saw a serpent-like creature emerge from the waters as he stood at Watbarrow Point across from Waterhead.

He described it as being 15 to 20 feet long with a little head and two small humps following in its wake. He said it looked like a giant eel.

“I can see it in my head now, this grey lump and the humps breaking the water like you see in the classic Loch Ness pictures. There is something in there, something quite big and elusive.”

Mr Adams, whose picture of the creature was studied by photographic experts after appearing on the front page of the Gazette, said: “I looked at it through binoculars and the naked eye and what I saw was huge.

"A lot of photographic experts have had the opportunity to look at the pictures and they are still baffled.”

Ecology experts have told the Gazette that catfish are sometimes introduced to lakes by anglers. They believe that what could be being seen is the Welsh catfish that originates from mainland Europe. 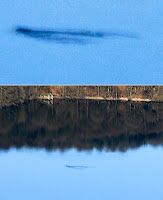 A bizarre swimming incident on Windermere coincided with the announcement that a team of paranormal investigators will plumb the lake’s depths in search of a giant creature.

Thomas Noblett, 46, was swimming the lake this week when he was suddenly swamped by a three-foot wave of unknown origin.

A spate of eyewitness sightings reported by The Gazette during 2006-2007 described a 50-foot long serpent-like animal surfacing on Windermere.

Psychic Dean ‘Midas’ Maynard, who came to prominence by accurately predicting sports score lines and X factor winners, will join The Centre for Fortean Zoology (CFZ), in the hunt for the beast in September.

Mr Noblett trains on the lake for four hours every day in preparation for a channel swim.

Never having had to deal with anything more than the odd passing trout, the 46-year-old said he had since reconsidered the legend of the Windemere monster.

“I didn’t entertain it before. Now when I’m in the lake it has my full attention,” he said.

Mr Noblett, managing director of The Langdale Chase Hotel, was swimming close to Wray Castle at 7am on Wednesday morning when the 3ft swell hit.

He and swimming trainer Andrew Tighe – paddling in a boat beside him – were the only people on the lake.

“We had gotten up early and Windermere was crystal clear. The lake was totally empty apart from us and all I could hear was the slapping of my arm against the water,” explained Mr Noblett.

“All of a sudden this wave just hit us. Andrew said ‘where the hell did that come from?’ and it made the boat rock from side to side,” he continued.

Treading water, alone, in the centre of the lake, Mr Noblett watched as two large waves sped towards either shore.

“It was like a big bow wave; a three-foot swell at least. There was two, as if a speed boat had sped past, but there were no boats on the lake,” he said.

Previously an escape from the jellyfish he dodges while training at sea, Mr Noblett said the lake’s depths were not so inviting anymore.

“I always look forward to swimming in Windermere, now I’m starting to get the fear. Twice I have looked down and seen fish, but only small trout. The reeds sometimes scare you, because they suddenly appear like triffids.”

Devon-based CFZ are the world’s only full time cryptozoology organisation for the study of unknown animals.

Dean ‘Midas’ Maynard will join CFZ in September to search the lake for the monster.

Mr Maynard, with a background in ghost hunting, is currently searching for a sonar-equipped boat to use in the search.

“It’s a fascinating subject. I’m not saying there is or isn’t something down there. Most eyewitness accounts describe some sore of eel, which if living in open water can grow very big,” said Mr Maynard.

Mr Noblett is swimming across the English Channel in mid October. He hopes to raise £10,000 for Richard Rose Central Academy in Carlisle and the Cyctic Fibrosis Trust.

Windermere, UK - Sightings of a suspected monster in Windermere have prompted claims that it could be the English equivalent of Nessie.

The 50ft long "creature" was snapped by photographer Linden Adams, 35, who was out walking with his wife near the lake recently.

They were at a secluded spot more than 1,000ft up a mountain when they spotted a dark shape moving in the water.

"It just came out of the blue," said Mr Adams. "The water was incredibly peaceful and then this huge thing appeared, diving and thrashing around."

He thought it was 50 ft long when compared to boats nearby.

He said it had a head like a labrador, only "much, much bigger".

Mr Adams, from Bowness-on-Windermere, said he knew the lake well and what he saw was not a freak wave or boat. His sighting comes just months after scientists visited Windermere to examine claims by a tourist that they saw a 20 ft "serpent-like" creature.

A team of scientists visited the site last October to interview eye-witnesses and sent divers to Coniston Water to investigate reports of similar sightings there.

Mr Adams has christened his find the Bowness monster. "When I looked at my pictures on my computer I realised I had something," he added.

He sent his picture to a forensic photographer who confirmed it had not been digitally enhanced.

Richard Freeman, of the centre for Fortean Zoology which researches mystery animals, said the sightings could be giant sterile eels which, unlike normal eels, stay in fresh water and "get bigger and bigger".