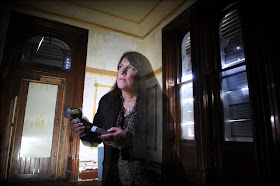 MCC - NEW evidence has emerged that spirits inhabit Narellan’s Studley Park House after a documentary crew claimed to have captured audio of a young girl moaning.

“We were up in a room where Debbie said there was the spirit of a young girl,” he said.

“We picked up what sounded like a young girl making some noise.”

He is certain of finding paranormal activity on 36 hours’ worth of static camera footage yet to be reviewed: “I’d be surprised if we didn’t get anything.

“We set up a few target objects in the smaller rooms, like a teddy bear and balloons. If we see any of those move by themselves, it will indicate paranormal activity.”

No reported death of a young girl exists - 14-year-old Ray Blackstone drowned in a dam near the house in 1909, and Noel Gregory, 13, perished of appendicitis there in 1937.

But according to ghost tour guide Joanne Gulson, the spirit belonged to “Amelia”, whose violent rape and murder in a top-floor bedroom at age 8 went unrecorded.

“She looks like Shirley Temple,” the medium said. “She’s extremely playful; we left a toy there for her to play with.”

Earlier this year, roofing contractors claimed to have discovered a hangman’s noose dangling inside the house.

A building contractor restoring Studley Park, which is being remade into the Australian home of The Sir Henry Royce Foundation and a Rolls-Royce museum, declared himself a sceptic.

“I’ve been staying here overnight for the past 10 days and I’ve seen nothing,” Tom Duffy, 61, said.

NOTE: go to Studley Park Spirits Captured on Tape and peruse the links at the bottom of the article...lots of great information on this location and other paranormal / cryptid accounts in and around New South Wales. Lon 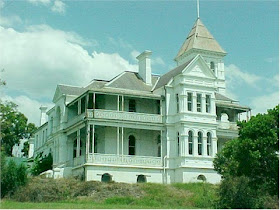 Studley Park House's reputation for being haunted has deepened after workmen responsible for repairing the old house made a disturbing discovery.

The men have been busy replacing parts of the iron roof and repairing the slate to make the 120-year-old Victorian mansion watertight.

But it's the interior that has had them buzzing after they stumbled on a hangman's noose dangling from the home's steeple roof.

Studley Park House the centrepiece of Camden Golf Course has long been regarded as one of Camden's most haunted abodes.

The haunting theories were spawned by several tragic incidents that occurred on the site like the drowning of a 14-year-old boy in the property's dam in 1909 and the death in 1939 of the son of then-owner Arthur Gregory, a sales manager for Twentieth Century Fox Australia. Mr Gregory's son reportedly died in the home's theatrette from appendicitis.

Rod Nash, director of Affordable Roofing, the company repairing the roof, said he had no doubt the house was haunted. Despite uncovering the hangman's noose, Mr Nash said he was keen to visit the house at night.

Studley Park House was built by Narellan grazier William Payne in 1889 for his bride but after running into debt he sold it to an architect.

The grand home changed owners several times over the years and has been used as a private residence, as Camden Grammar School and for army training during World War II.

``I've been in the house at all hours of the day and night and I haven't seen a ghost,'' he said.

The same can't be said for the four contestants who spent time isolated in the dormitory, cellar, theatre and tower for the 2001 filming of Scream Test, a psychological reality game show. The brave participants were locked in the house as cameras filmed their feelings, thoughts and any paranormal occurrences.

One of the contestants, who reported hearing voices, was too spooked to continue the challenge and another said he'd heard a baby crying from a corner of the room. ``Kids have said they've walked past the house and seen a lady looking out the window,'' Mr Herbert said.

``Someone once reported seeing the lights on in a part of the house where there were no lights. Another time when the fire brigade was called to investigate a report of lights being on, they checked the mains and found they were switched off.''
______________________

THE HISTORY OF STUDLEY PARK HOUSE 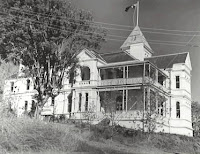 In October 1888, grazier and businessman William Charles Payne bought land near Camden in an area called Narellan in southwest Sydney. He named his newly acquired property "Studley Park", after the original Studley Park located in Yorkshire, England. In 1889, construction of a grand Victorian mansion began. Designed by A. L. & G. McCredie, a prosperous architectural and engineering firm, it became known as "Payne's Folley".

Unfortunately, due to financial difficulties, Payne was forced to sell the house to pay off his debt to the house's architect, a man named Francis Buckle. Buckle used Studley Park House as a weekend retreat until it was sold to Dr Henry Oliver, the headmaster of The Camden Grammar School in 1902. The school had originally been located at St Helen's Park House in Campbelltown.

On October 15, 1909, fourteen year old student Ray Blackstone and 5 of his fellow boarders decided to go for a swim in a nearby damn. Despite being told time and time again about the dangers of swimming in the dam, the boys ignored the warning. During an attempt to swim to one side of the damn and back, Ray began to struggle. Despite the assistance of his friend, Sydney Langford, the boy drowned. His lifeless body was brought ashore by senior students and it is reputed to have been stored in the cold, dark cellar of Studley Park House, awaiting burial.

The school was sold in 1919 to Reverend Charles Herbert Palmer and continued to operate until 1933 when it was packed up and moved to the home of Parliamentary Member for Sydney, William Bede Dalley, in Manly.

Studley Park was sold to Arthur Adolphus Gregory, sales manager of Twentieth Century Fox Australia. Gregory furbished Studley Park House in Art Deco style and converted the student's dining room into a theatrette. A keen golfer, he had a nine hole course designed for the land surrounding the house. A further nine holes were later added and the original stables block/classroom was converted into the golf club.

In 1939, tragedy struck when Gregory's son died in the theatrette from appendicitis.

When World War II began the property was taken over by the Department of Defence and became The Eastern Command Training School. Accommodation was increased to house the 280 staff and students attending the school's courses. Lieutenant A. R. Cutler, a future Governor of New South Wales, was one of the first students to graduate. In 1951 the first intake of the Women's Royal Australian Army Corps began their training at Studley Park.