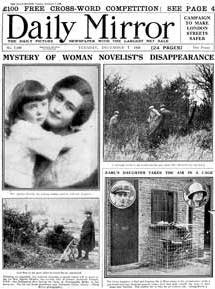 It's a story that even the 'Queen of Crime' couldn't have come up with: the mysterious disappearance of the most famous writer in England and subsequent nationwide search, then fifty years later a seance in a glamorous Istanbul hotel and the discovery of a key that could solve the whole mystery.

It all began on December 14th 1926. For eleven days England and the rest of the English-speaking world had been up in arms over the disappearance of none other than one of the most famous authors in the world.

For months, Christie had been dealing with a lot of stress and tragedy, including her mother's death and the revelation of her husband's long-time affair. Her newest novel, The Mysterious Affair of Styles, though selling well, was also met with criticism that some say was due to it's “unorthodox” plot. The break from literary norms nearly got her kicked out of the Detection Club for violating the rules of “fair play.”

On the morning of December 3rd, Christie had an argument with her husband, World War I pilot Colonel Archibald Christie (Archie) which was presumed to be about his upcoming trip. Christie believed he was planning to see his mistress (Nancy Neele). Later that same day, she wrote two letters (to her husband and to her secretary) canceling all of her appointments. She then left in her car and did not return that night.

Alarm was raised the next morning when she had yet to return. Later that day her car was found in a ditch off the side of the road a few miles from Styles, near the hotel where her husband was going to spend the weekend with his mistress. The car was abandoned and covered in frost, with the lights left on. Inside was an expired driver's license identifying the car's former occupant as Christie, a fur coat, and a small suitcase containing a couple of pieces of clothing.

Of course, this was BIG news and it created a media frenzy. 15,000 (or so) volunteers searched the surrounding area and it marked the first time in British history that planes were used as part of a search party. When the police learned of Archie's affair, he became the prime suspect. The police tapped his phones and he was followed everywhere that he went.

"I would gladly give 500 pounds if I could only learn where my wife is." Archie announced in a public statement. But the question remains, was Archie a concerned husband or just playing his part in public?

There were many guesses as to what happened. Some people thought that she had been murdered, others that she had suffered a bout of amnesia. There were several cynics who suspected an elaborate publicity stunt. Several writers wrote articles outlining their elaborate theories as to what they believed to have really happened. As the days passed, more and more people believed her to be dead.

Christie was not dead, but where was she? On December 14th, she was discovered at Harrogate Hydropathic Hotel in Yorkshire (Northern England) and had apparently gone directly there, from her home. She checked into the hotel under the name of Theresa Neele, using the same last name as her husband's mistress. Apparently, several of the guests recognized her, but she denied who she was. The police and her husband were notified. When her husband arrived, it's said that she greeted him as her brother.

Christie claimed that she was suffering from amnesia. She and her husband went back to their home and told the press that she was coping with memory loss as a result of her mother's death. Despite two doctors examining her and agreeing with this prognosis, the public remained skeptical. Some maintained that it was a publicity stunt, and criticized her for wasting the taxpayer's money. Others believed that she had done it to publicly embarrass her husband as revenge for his adultery.

Whatever the reason truly was for her eleven days missing, she never revealed it. It was widely believed that with the release of her biography (after her death) there would be some reference to this period and her true reasons behind her disappearance, but she never mentioned it.

Christie was said to have spent a a lot of her time in the 1920's and 30's at the Pera Palas Hotel in Istanbul. It happens to be where she wrote Murder on the Orient Express in room 411, preserved to this day as tribute.

In preparation for the movie Agatha (1979 release), the studio turned to a known psychic, Tamara Rand and asked that she hold a seance in Christie's room at the hotel in hopes of contact. Rand, if you remember, has had some fame due to her prediction of Ronald Reagan's assassination attempt. Rand claims that during the seance, she witnessed Christie hide a key under the floorboards in her room.

The workers in Christie's room tore up all the floorboards. In the corner between the door and the wall, they found a small, rusty key. Rand claimed that this key would open Christie's diary and would reveal the secret to Christie's disappearance. The press was ecstatic about the potential of the discovery. But celebration came too soon. The diary key couldn't be taken back to England and tested. The hotel management and the movie studio could not reach an agreement on the price to be paid for the key, so the key never actually left the premises of the hotel, and it remains there today, the last hope perhaps to obtaining the answers to her disappearance. Another key numbered 411 was found in another room in the Pera Palas in 1987, adding further confusion to this mystery.

For the past decade or so, Horacio Velmont and the Grupo Elron (Entities of Light) claimed to be channeling L. Ron Hubbard, founder of Scientology. Now, Scientology does not recognize channeling but this group claimed that Hubbard regularly conversed with them.

In 2004, a channeling session was conducted and the discussion of Agatha Christie's disappearance took place. The following is the supposed transcript from that session:

Interlocutor: I will talk now about the famous writer of mystery novels Agatha Christie who played the lead in her strange disappearance in December of 1926. Nobody knew her whereabouts during eleven days, and when they found her in a small hotel, she said that she had lost her memory. Many conjectures were made, but definitely everything remained in the fog.

Ron Hubbard: She met a sixty year-old person more or less, and she became very friend of this person, she told to this person many things, her sorrows, her marital problems, her loss, her loneliness. This person held her back as a confessor.

Interlocutor: Are we speaking of a man or of a woman?

Ron Hubbard: This person was somehow from an indefinable species between a man and a woman. She took it as an androgynous.

Interlocutor: But in fact what it was?

Interlocutor: What was the name of this person?

Ron Hubbard: His name was Epipheo.

Interlocutor: What a strange name! Was he English?

Ron Hubbard: No, he was not English, but extraterrestrial.

Interlocutor: Extraterrestrial? I already thought that there was something fishy. With my characteristic "wickedness" I will ask you if there was "something more than friendly conversations" between them.

Ron Hubbard: I understand what you mean. Yes, there was intimacy between them.

Interlocutor: Was this alien humanoid or a human type?

Ron Hubbard: It was human type.

Interlocutor: And his origin?

Interlocutor: One can say that during that week Agatha was with the extraterrestrial, it was something like a "honeymoon."

Ron Hubbard: Completely, because that is what it was.

Ron Hubbard: That person told her that she won't be able to contact him anymore, because he had to return to his world, without explaining which one it was.

Interlocutor: Did she know he was an extraterrestrial?

Ron Hubbard: Yes, because he told her.

Interlocutor: Did she believe him? Did she see his ship?

Ron Hubbard: She had doubts. No, she didn't see his ship.

Interlocutor: Did he come in a spacecraft? or he simply came in an exploration device from his planet

Ron Hubbard: He was an explorer, who came alone.

Interlocutor: Now I understand why she had to remain silent, because on one hand nobody would have believed her that she had an encounter with an extraterrestrial and even less an intimate relation with him, and on the other hand, she had her doubts.

Interlocutor: Is there something else about this story?

Ron Hubbard: No, there is nothing more, because the main thing has been explained and the details on the case are not interesting.

There have been reports of alien abductions all the way back to the Bible, this is evident if we consider with logic and common sense the sightings of “chariots of fire and raptures” mentioned in the scriptures, in spite of that, close-minded people deny that alien abductions could be real and they insist stubbornly that all the abductees are insane or they simply hallucinate. Skeptics refuse to accept the facts because those events are beyond their understanding.

At the present time, skeptical people of the UFO phenomenon are doing the same thing that religious people did in 1633 with Galileo Galilei, when they imprisoned him because he had claimed that the Earth was not the center of the universe, Galileo had to recant to save his life from the fire, something that Giordano Bruno did not do since he was convinced of his ideas and he was burned at the stake because he had affirmed that the man was not the maximum work of God and that other inhabited worlds existed in the universe.

Fortunately, skeptical people will not burn those who have these ideas, but they will laugh at those who had suffered an alien abduction with scorn.

NOTE: First off, I have NO affinity towards Scientology...in fact, I consider it a moronic cult. Second, I presume that L. Ron Hubbard was an average science fiction writer and an excellent con-artist. That being said, Velmont and his group have no connection with Scientology from what I can gather. For this reason, I find it interesting that Hubbard is their messenger from beyond. I'm not going to state an inference or draw any conclusions (though, you can probably guess what I'm thinking). I'll just post the information and let you decide...Lon