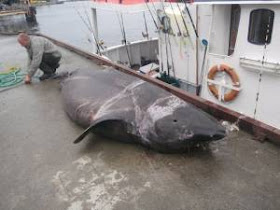 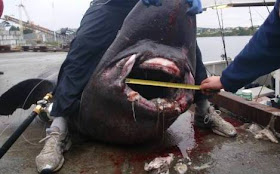 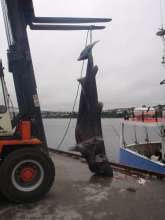 politiken - Per Jensen and Henrik Hansen have smashed the world record for a shark landed by fishing rod.

According to NRK it took the Danes 45 minutes to land the 880 kilo, 4 metre and 10 cm Eqalussuaq or Greenland shark (Somniosus microcephalus) in Norway’s Bokna Fjord. The previous record for a rod-caught shark specimen is said to be 775 kilos.

The Bokna Fjord is in Rogaland County between Stavanger and Haugesund.

The two had traveled to the Bokna Fjord as they had heard that particularly large Greenland shark were to be found there. For bait, the two used an empty potato sack full of plaice.

The plaice would probably have been a better bet if the two had hoped to catch something to eat in the near future. The meat of the Greenland shark is toxic as the flesh contains trimethylene oxide, which when digested has the same effect as severe drunkenness.

When properly prepared in a painstaking process, it can however be eaten and is considered a delicacy in Iceland and particularly Greenland, where the fish, which is not generally dangerous to humans, is closely tied to Inuit folklore.

The Greenland shark, which also bears the names sleeper, ground, gurry or grey shark is one of the largest species of shark and can grow to over six metres.