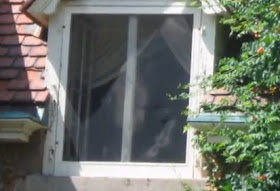 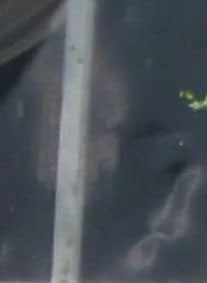 <-- Is this a ghost? Could it be the apparition of Washington Irving?

TP - On June 26, 14-year-old Rachel Lambert saw something a bit unusual in a photograph she took earlier during her trip to Washington Irving's Sunnyside.

After seeing Tim Burton's film, "Sleepy Hollow," Rachel pursued her interest in the paranormal and convinced her family to take a trip from Rotterdam, N.Y. to see what the town of the horseman is really like.

They ended up wandering the estate of Tarrytown's Sunnyside and as they did, Rachel saw something strange in a window of Irving's cottage. She snapped a picture and moved on, as not to miss any of their tour guide's fascinating historical speech. When Rachel got home the next night and viewed the picture on the 27-inch screen of her computer, she found that the creator of the Legend of Sleepy Hollow had not let her down (see attached video).

She and her family were able to make out a figure that looks like the head and upper body of a ghost holding a quill pen. Rachel determined that before her eyes was a picture of the ghost of Washington Irving.

Rachel's father Ed believes that his daughter's sighting of the spirit may not have been a sheer streak of luck. Just before the family stopped outside the cottage, they were having a conversation with the guide about Rachel's achievements as an English honors student and her dream of becoming a writer. They additionally spoke about her interest in Sleepy Hollow and how she had planned out sights to see and goals for the trip, which included stopping at Washington Irving's grave in the Sleepy Hollow cemetery beforehand. The family thinks that Irving's spirit may have overheard this conversation and acted. Perhaps Irving's thoughts were, "I'm gonna let her see this and do this for an aspiring author," as Rachel's father put it.

When Historic Hudson Valley, the organization entrusted to maintain the estate, was contacted, spokesperson Rob Schweitzer said he was "unaware" of any ghosts at the estate.

But some ghost enthusiasts maintain the Sunnyside is known for holding the spirit of Washington Irving. "The legend says he still haunts the house," said Donna Davies, of Haunted Hudson Valley. "He passed away in the house. If he was going to haunt any place he would haunt Sunnyside."

Another ghost hunter, Linda Zimmermann, has written many books on the hauntings in the Hudson Valley and agrees with Davies' assessment in her book Ghost Investigator: Hauntings of the Hudson Valley, Volume 1:

* "Irving made his home at Sunnyside in Tarrytown. Some people claim that to this day, he still resides in his beautiful mansion. That are reports that Irving's spirit walks the halls and rooms of Sunnyside, and that he particularly favors the tower know as the Pagoda. It seems to be poetic justice that the man most know for his ghost story would pass on and create one of his own."

Rachel was certainly excited by this sighting and claims that she is now even more interested in Sleepy Hollow, Irving and ghost stories. As for her parents, Rachel's mother emphasized that they have always been open about the paranormal with their children and allowed them to explore its possibility rather than fear it.

Ed however, stated that he always thought there could be a potential for the spirit world, but that there are also other scientific ways to explain such mystical events. "Do we make these things up in our minds or are they there?" he initially thought. But after taking several close looks at the photograph he said, "I think it's there."

Many family members and friends that were shown Rachel's photograph were similarly shocked by the image and questioned their ideas about the spiritual world.

"I think it made some people believers," said Ed Lambert.

Some even said that it looks like there are several ghosts in the image, besides Irving's spirit. The Lambert family believes that some kind of paranormal investigation should be done to determine what is really in the photograph and at Sunnyside.

The Lambert family plans to return to Sleepy Hollow and Tarrytown in the fall to see the scenery of the season, and perhaps to further explore the possibility of the supernatural in the villages.

Although Rachel is likely to also pursue her interest in the paranormal elsewhere, her recent experience and haunting souvenir caused her to admit, "I think there's something special about Sleepy Hollow.

The Legend of Sleepy Hollow

Ichabod Crane, a Connecticut schoolteacher, arrives in Sleepy Hollow in 1790 and is immediately attracted to the supernatural tales told by the area’s Dutch housewives, particularly the tale of a headless horseman. According to the story, he is a Hessian cavalryman who was decapitated during a battle in the American Revolution. Each night he rides out searching for his lost head.

Crane also spends his time pursuing a young woman, Katrina Van Tassel, the "plump," 18 year-old daughter and sole child of a wealthy farmer. This infuriates a rival for Katrina’s hand, “Brom Bones" Van Brunt, a handsome but rather rowdy and brutish man who subjects Crane to ridicule.

One Autumn night after attending a party at the Van Tassel home, Crane encounters the headless horseman near a bridge and the Sleepy Hollow Cemetery. A pursuit through the countryside follows during which the spectral horseman hurls his “head” at Crane. The next day the schoolteacher is missing, leaving behind a riderless horse, a trampled saddle, Crane’s hat, and a smashed pumpkin.

Irving leaves it to the reader to decide if the horseman was an actual specter or Van Brunt in disguise.

The cemetery in Sleepy Hollow is a beautiful Victorian era cemetery with many hills and valleys in a gothic park-like atmosphere, situated on the east side of the Hudson River. It contains the final resting place of Washington Irving, the author of the Legend of Sleepy Hollow – Ichabod Crane's encounter with the Headless Horseman. Washington Irving wrote, in a letter addressed to the editor of Knickerbocker Magazine, “I send you herewith a plan of a rural cemetery projected by some of the worthies of Tarrytown, on the woody hills adjacent to the Sleepy Hollow Church. I have no pecuniary interest in it, yet I hope it may succeed, as it will keep that beautiful and umbrageous neighborhood sacred from the anti-poetical and all-leveling axe. Besides, I trust that I shall one day lay my bones there.” Washington Irving’s gothic revival home, known as Sunnyside, is situated not far from his gravesite, along the Hudson River.

Also buried at the Sleepy Hollow Cemetery are other luminaries such as: Andrew Carnegie, Walter Chrysler, William Rockefeller, and Elizabeth Arden. The television series “Dark Shadows”, which featured vampire Barnabas Collins, witches, ghosts, and other supernatural creatures, inspired a film, “House of Dark Shadows”. In the film, Lyndhurst, a gothic revival mansion in nearby Tarrytown, was the Collinwood estate and a mausoleum in the Sleepy Hollow Cemetery was shown as the Collins family tomb. The cemetery is rather renowned and guided tours are offered in October. It is also adjacent to the cemetery of the Old Dutch Church, which is the resting place of those who inspired Irving's characters of Katrina Van Tassel, Brom Bones, and the headless Hessian soldier.