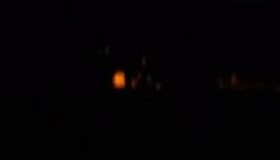 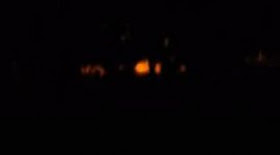 I received the following email from a reader in California:

The encounter I am about to share with you happened early December 2009. I do not wish to share the exact date because we were trespassing on private property at 1am at a Marysville, CA cemetery I'm keeping our names unknown for now.

It all started with...

I play drums in a band from San Francisco, Ca. The trip consisted of myself and three other band-mates/friends. (Singer, bassist, myself, and our good friend the photographer.) We went up north to play a festival in Quincy, California. This was a day trip so we drove up early to Quincy, played and headed back. We drove through Marysville, California on the way up during the day and noticed an amazing old cemetery. Thought nothing of it blah blah blah. However, on our drive down from Quincy, at around midnight, we were stopping off the side of the road in various places to take advantage of some "out of the box" photo ops. We then all started to remember the old graveyard we passed on the way up during the day and were all kinda joking about how cool it would be to take photos there at night.

We are finally drawing near the location of the cemetery in which the only land mark was a distant gas station, so we saw the gas station and turned around to find the entrance road to the cemetery. We enter this little road leading to the cemetery and there is a huge bar blocking any further access to the road. So we park the car and get out, walk about 300 yards to the old iron gate leading into the graveyard. It's padlocked (obviously)... it was 1am at this point. We read the sign posted at the gate stating something like "Access by appointment only, cemetery closed to the public, call ##### for appointments".

At this point I was like, "guys it's closed lets just get out of here" the bassist (my brother) says "no way, lets jump the fence and take some band pictures, this place is sick" The singer and I are saying NO WAY, we were all a little creeped out anyways, let alone trespassing in the middle of the night. Lo-and-behold, what do we do...we all jump the fence and make our way into the cemetery.

There is only one very orange light in the center of the cemetery, and numerous motion activated lights throughout as well. Chills were crawling through all of our spines only due to the fact that is was an adventure in itself. We never even brought up ghosts or any feeling related to that. At this point is was plain creepy being that it was in fact an old rickety cemetery late at night, in the middle of bum-f**k nowhere.

We did a few snap-shots here and there under the orange lighting and in front of some old marble tomb stones. We then started to just have a little fun, running around joking, and trying to scare each other.

About twenty minutes into our antics, my brother (bassist) mentions that he wanted to go deeper into the cemetery, the rest of us were saying "hell no, no way". It was pitch black beyond the orange light in which we were standing. A few minutes after while discussing going deeper in we heard this very clear, LOUD, noise coming from one end of the cemetery. The sound was as if someone had a very large sheet of metal and was rubbing it on a rock. shhhhhingggg! Chills ran up all of our backs.....we all stood there and asked each other "did you hear that?" "yes, yes, yes".....everyone heard it. We stood quiet for a moment......the sound happened again. shhhhhingggg!...in the direction in which we thought the sound was coming from a motion activated light came on....I'd say about 100 yards from where we were standing. It then turned off almost as fast as it came on. Then, a little to the left, another light came on, and then off, as if something was triggering it. Yet we saw nothing. We ALL at once ran to the fence and jumped over to the outside of the cemetery. We thought maybe it was someone coming to tell us to get out and that we were trespassing. We ran all the way to the car and caught our breath. There was no one in sight. Just us. The sound kept occurring all the while...about once every 30 seconds or so. We stood bewildered by the car, quiet and a little confused as to what the sound was and as to why those two lights were triggered. We were a bit spooked but also very curious about what was happening. So we remained standing by the car. I lit a cigarette and gazed into and around the cemetery. I SH*T you not...this next part is all true with four of us to varify it.

A young girl's voice giggles in the distance. This sounds cliche, I know, but it is a very real experience. I ask the guys to "Shhhhhh, did you hear that?" We all stand very quietly, the giggle happens again and everyone heard it plain as day. A third time it happened and at that moment foot steps running very fast in our direction followed. We freaked and all jumped into the car. We started to drive off and then my brother and myself said, "stop the car...stop the car". We were having such REAL experiences out here that we wanted to try and catch something on film. Why not right? So my brother and I get out of the car with our friends camera. We stand up above the cemetery and start filming. We catch on film, crunching noises, tractor engines. We actually caught on film what we still think to this day is an apparition of a woman in a dress. Here is the youtube video.......bad quality because of the transfer to youtube, but if you are interested I will send you the raw HD footage. You say the word.

NOTE: Something does walk in front of the orange light and something does light up near the light. As well, there are noises and voices. I took a screen capture and enlarged it...not sure what that is. I have requested from the witness any further evidence available. I will post if it arrives...Lon