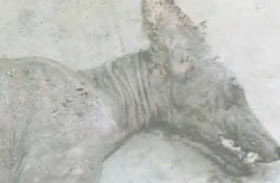 NOTE: These creatures are not 'chupacabras'. Most likely, these 'blue dogs' are a hybrid species of Mexican wolf and another canine species. Ken Gerhard and Jon Downes have done extensive study and have written about this cryptid canine. I just wish people would stop killing the 'blue dog' just because it's been given the 'chupacabras' moniker. Below are previous posts on this cryptid...Lon 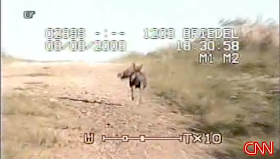 kdnews - Mystery and science fiction novels are a weekend hobby for some, but one local couple is turning their free time to attempting to solve strange mysteries in nature.

Richard and Naomi West just returned from a weeklong trip around Texas collecting pictures and video based on reports of strange blue-skinned, dog-like animals around the state that some have called the answer to the "chupacabre."

The Wests, along with the founder of a British nonprofit supporting cryptozoology, hope their reports from the expedition will help them gain support for a more in-depth mission to study and hopefully capture what they believe is not a being of folklore, but a new species of canine similar to a coyote.

"It is a very weird and very interesting member of the dog family; it has nothing to do with this weird folklore," said Jonathan Downes, a former zoological journalist and self-taught amateur "cryptozoologist" from West Devon, England.

Almost 20 years ago, Downes founded the Centre for Fortean Zoology, a nonprofit devoted to cryptology with more than 400 amateur and professional members interested in cryptozoology, the study of unknown species.

Naomi West, an English teacher at Copperas Cove High School, said she was always interested in reading about mysteries and strange phenomenon, but two years ago she joined the student book club and ran across an interesting book during "books with bite" week. While her students were reading about monsters and vampires, Naomi found a somewhat fictionalized account of Downes' cryptozoological expeditions to find new species, "Three Men Hunting Monsters."

She was hooked and contacted Downes about her interest. Eventually, Naomi and her husband began helping Downes by tracking down through the grapevine and media reports of the blue-skinned chupacabre creature.

The media have reported from Elmendorf to Blanco to Cuero about sightings of a mysterious blue-skinned creature as a possible chupacabre.

The chupacabre is a Spanish folklore creature that sucks the blood of livestock, and has been reported in various kinds of animals from small and reptilian to the blue-skinned canine all over the world from Russia to Puerto Rico to Texas.

John Young, the non-game mammologist with the Texas Department of Parks and Wildlife, is the state agency's expert on the Texas chupacabre reports of strange blue-skinned animals. His responsibilities cover the state's cats, bats, rats and other smaller mammals.

Texas Parks and Wildlife's take on these reports has been simpler than a new animal or a mythological beast.

"None of them have been confirmed as anything other than a coyote or a fox," Young said.

Even though people may know what coyotes look like normally, Young said a severe case of mange can cause a coyote or fox to lose all of its hair, sometimes leaving just a strip along the back.

Without fur to protect its skin, the coyote is exposed to sun and elements that can give them a blue or blue-black appearance over time. The sickness can cause the animal to act strangely, and once it has died from the mange the animal's skin pulls back giving it the appearance of larger teeth than normal.

Of course, there are also some people who have attempted to create their own chupacabre creatures, Young said, but most people aren't doing that.

"The majority of people … they're honestly seeing an animal that baffles them," he said. "But we have yet to have found one that didn't tie back to a coyote or one of our other native canines."

Downes said that coyotes with mange are the solution to several of the reports, but there is also another unknown creature that deserves to be studied to identify a potential new species.

Downes and the CFZ believe there are physical differences, particularly visible in one blue-and-black skinned creature that was shot and stuffed in Cuero that show the creature nothing like a coyote.

The main point of Downes' trip to Texas with his wife, Corinna, and their expedition with the Wests has been to prove that there is a potential new species that deserves to be studied.

"What they are, why they are like that and where they fit into the ecosystem," he said. "I spend a lot of time trying to convince people this is a canine that is deserving of being studied."

Attempting to stir up interest

For now, the Wests and the Downes are just trying to stir up interest. And in their recent trip, Richard West said they found a lot of interest in cryptology and other weird phenomena that they want to encourage.

Naomi West wants to start a Web site aimed at children to help use their interest in new species and mystery creatures to get them interested in sciences and mysteries.

NOTE: there certainly have been many reports of these creatures just to simply state these are coyotes with mange. I heard that Mexican Wolf DNA turned up in one of these animals....but I can't confirm that. Is this a strange hybrid or possibly a new species. The fact that Jonathan Downes of the Centre for Fortean Zoology and Texas Blue Dogs, who I have considerable respect for, is investigating these creatures adds credibility to this study...Lon 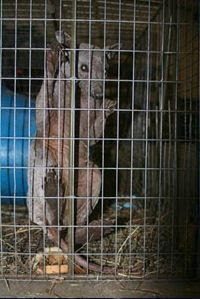 bin - A bizarre-looking animal that has been roaming the countryside of rural Mayes County has been captured and turned over to wildlife experts in Claremore.

Jeremy Scheffel says he first encountered the creature on his back porch a few weeks ago. When he turned on the outside light he saw the animal scurry away. It looked so strange, he says he thought he was losing his mind.

Scheffel decided to try to capture it. His friend Josh Cook set out a trap and within 24 hours had succeeded."It looks like a huge rat. It's kind of creepy," Scheffel said.

He says it's known as the Dry Gulch chupacabra, after the legendary animal that supposedly sucks the blood of goats.

NOTE: Possibly a 'Blue Dog', though this one seems to be smaller...check out Jonathan Downes' Texas Expedition 2010 blog.