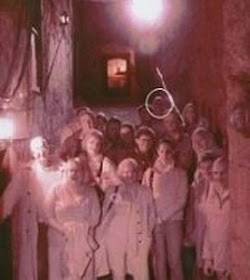 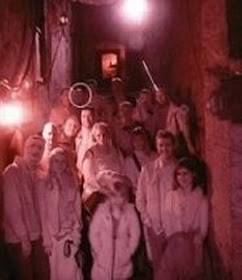 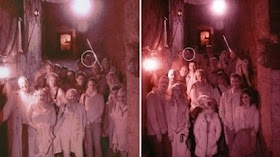 STV - Staff at one of Edinburgh’s spookiest tourist attractions have been left mystified after a ghostly figure showed up in the photographs of two separate tourists.

Bosses at Mary King’s Close say the blond haired woman who appeared in images from two different tours was definitely not a customer.

Both photos appear to show one person more than expected and staff believe that on close inspection, the ghostly figure appears to be the same woman.

Staff were first alerted to their unexpected visitor last October, when a member of the public queried their souvenir photograph. A few weeks later, the same thing happened with a different tourist, and staff say they have been trying to figure out what is going on ever since.

They have now introduced later night tours for the month of August in a bid to get to the bottom of the mystery. And they have asked anyone who sees a strange apparition in their pictures to allow them to be examined.

Lisa Robshaw, spokesperson for The Real Mary King’s Close, said: “We hope that by extending the hours of opening we can get to the bottom of this mystery.

“We’ve long been associated with supernatural and unexplained stories. We’ve had sightings of dark shadowy figures who lurk in the myriad of passageways, rooms and corners of the Closes, and reports of lots of strange noises – these images seem to give us even more evidence.

“By running tours late in to the night with the last one finishing at midnight, we hope that this might make the ghostly image reappear. “

Ms Robshaw insisted the images had not been doctored by staff, adding: “We have spent a long time studying these photographs and cannot come to a satisfactory conclusion. In both these images there appears to be a blurry ghostly image of a blond haired lady which we cannot explain, and we hope that by making the images public that someone might be able to help.

“If there are people in the images who can explain who the lady is we would love to hear from them. We’ve tested the static camera that we use and it appears to be working normally so we really do not have an explanation. We just want to try and understand what has happened.”

Mary King's Close is said to be one of Scotland's most haunted areas. Situated just off Edinburgh's Royal Mile, Mary King's Close is a real step back in time. The close, or street, has a dark history, and since it reopened, it has become a major tourist attraction. It is a draw not only for ghost hunters, but also for anyone wishing to view a real 17th century street.

Edinburgh itself is a city full of small, winding streets and dark alleyways. It is a historic city, and many of the original buildings date back centuries. Mary King's Close is one of the oldest streets now available for the public to view. It is a dark, winding street full of original shops and houses from the 17th century.

Like many Edinburgh streets in the 17th century, conditions were less than sanitary in Mary King's Close. Human waste was simply thrown out of windows onto the street. The inhabitants of the houses were poor, and illness was rife.

During the time when the plague raged in Britain, Scotland lost over a quarter of its population to the disease. Mary King's Close was rife with plague. City leaders decided to take the inhumane action of sealing off Mary King's Close in order to contain the plague that ravaged the inhabitants. Many experts claim that religion also played a role in this decision, as the street was inhabited mainly by Catholics.

Mary King's Close is mainly situated underground, and both ends were sealed with bricks in 1644, leaving the inhabitants to die inside. It was estimated that almost 600 people were found dead when the street was reopened within a year. Butchers sliced up the bodies, and they were taken through the streets of Edinburgh and buried in huge, mass graves.

Life once again resumed in Mary King's Close, mainly due to the cheap rents offered to new tenants. In the 19th century, the close was emptied and again permanently sealed up. It has been reported that the close was rediscovered by workmen digging above the street.

Since Mary King's Close has reopened, thousands of visitors have flocked to the street. Many have been attracted by stories of ghosts, and it has become a regular site for paranormal investigators. The dark, claustrophobic atmosphere of the streets, houses, and shops has also led many visitors to leave the close minutes after entering.

The most famous spectral inhabitant is said to be the ghost of 10-year-old Annie, who died of the plague. Many people have reported feeling her presence, including psychics who have noted temperature changes when entering her room. Visitors to the close now leave dolls and sweets in the room Annie is supposed to haunt. Ghosts aside, Mary King's Close is an excellent historical tour of a forgotten age.

NOTE: If they have the head counts right then a phantom may be taking in the tour. I've had several anecdotes and photos of apparitions popping up during tours of Scottish sites. BTW, Mary King's Close is definitely a place you want to see if you find yourself in Edinburgh...several friends and associates have had some strange encounters there...Lon