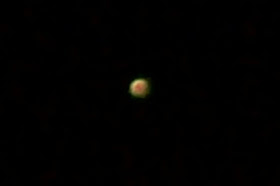 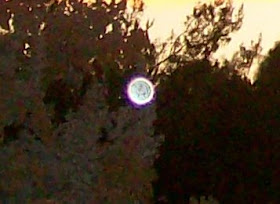 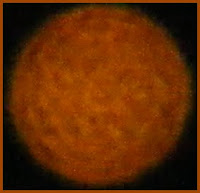 The following reports were submitted to the MUFON CMS within the past 24 hours. These are just a small example of recent (since last winter) orb and circle shaped sightings that have occurred worldwide. In particular, the number of described 'orange orb' sightings has increased tremendously. Granted, some of these could very well be Chinese lanterns...but I'm willing state that a majority of these sightings are legit unknown anomalies.

As well, the number of 'orb' sightings/photos has also increased dramatically. I literally receive 10-20 emails per week with photos of the objects attached. Are these simply moisture on the lens...light reflection...etc.? Or...are we starting to see a pattern of anomalous energy provided by unknown entities or sources? I've included several photos I have received over the past few years. 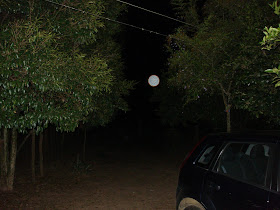 MUFON CMS - CSU Foothills Campus: Was taking photos of the night sky on LaPorte Avenue, near the CSU Foothills Campus and this appeared very briefly, perhaps for a second or two. Just a flash of light in an otherwise moonless and dark night at my location. This 'orb' didn't move, simply appeared and disappeared in the same spot.

Due to the long duration of my camera's exposures, it was able to capture the image. 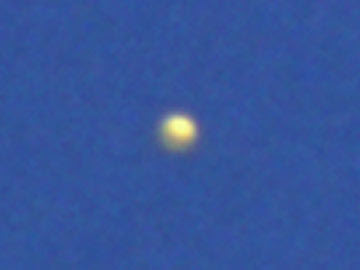 MUFON CMS - East Falmouth, Massachusetts: My mother lives on a saltwater pond about 1/2 mile width in East Falmouth. She was awoken at 3:20AM on 7/2/10 by a very bright ("sparkling like a diamond, but brighter" as she puts it) white star-like radiant object hovering above the tree line across the pond from her house. She indicates it was the size of a silver dollar if held out at arms length and 4 finger widths above the tree tops. The light caused a wide V shaped reflection on the pond as if the full moon were shining on the pond but wider. The sky was clear. There were no noises.

Distance was hard to deduce from our conversation and her experience but her estimates are that it was not too far beyond the trees that start 1/2 mile across the pond from her house.

I looked on Google Earth and if a line was drawn from the observation point to the object a few notable landmarks fall on this line in its path disregarding the variable of distance:

2 - Beebe Woods with a kettle pond directly on the observation line.

3 - Otis Air Force Base - approximately 6 miles NE of observation point, not on the observation line but interesting.

4 - A large radio tower about 1/3 of a mile south of the observation line.

Mufon Case 24094 in Augusta ME witnessed two similar objects hours earlier on 7/1/10 at 10:30pm demonstrate exact same object/s and behavior per my mothers review of that case, but she did not see two objects as that case indicated, just one object.

MUFON CMS - California: My lady friend and me were walking home from somewhere. When we were in the pre-school parking lot I saw my lady friend look up. Then I looked up seconds later, and I saw a perfectly round disc shaped object directly over my head. As soon as I saw it it was already speeding away straight up. Actually I just got a glimps of it, but could see it had pink and violet swirls on it that seemed to be alive. It measured about 2 feet in diameter. It quickly disappeared into space. 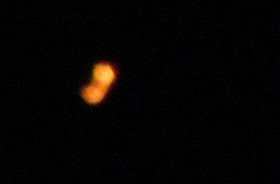 In January 2008, I wrote a post on the increased orb activity worldwide. This activity seemed to wane a bit until this current flap of orb sightings.

2007: The Year of the UFO - Unidentified Flying Orb

Flying orbs of various sizes and colors have been witnessed since we started looking to the heavens. Most sightings were either meteorites and small space debris entering the earth’s atmosphere or balloons and other explainable objects. Since the mid-1990’s, the internet has given many of us a tool to witness this phenomena. That being said, the year 2007 was a period of increased unidentified flying orb activity worldwide.

From the United Kingdom to Lake Erie, from the Yukon to Australia, the sightings have been constant and similar for most of the last 12 months. What does these mean? Are we being observed by an alien species or is this activity government generated. There are many questions and very few answers.

One of the early reports was on January 19, 2007 when witnesses reported seeing an unidentified flying orb hovering for more than an hour over Bouyer Ahmad, Iran. The glowing sphere was described as bright yellow with a pulsating red center, the Fars News Agency reported. The sightings follow a UFO crash on January 10, 2007 in the Barrez Mountains, Iran. Deputy Gov.-Gen. Abulghassem Nasrollahi of Kerman province said police and other authorities were investigating the incident. He stated the crash could not have been an airplane or helicopter because all aircraft flying through the area on that day had been accounted for.

A week later, residents in the Charlotte, North Carolina area called 911 dispatchers and reported seeing a weird hovering light in the sky. Emergency dispatchers answered the calls in Iredell, Lincoln, Mooresville and Huntersville. One Lincoln County officer reportedly saw it, and the National Weather Service in Greer, South Carolina got similar calls. Even stranger, people in between the two areas in York, Gaston and Cleveland counties had no such 911 reports. The Federal Aviation Administration had no reports of plane crashes or unidentified craft. 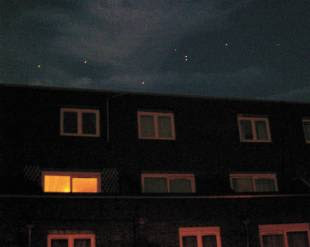 In early February, 2007, the first of many (and continued) unidentified flying orb sightings was reported in Islington, North London, United Kingdom. Dozens of mysterious lights were spotted hovering in the sky, spreading panic among the residents below. The flying orange objects stopped traffic and left residents staring skyward in disbelief. Islington police received four calls within a matter of minutes.

Witness Alix McAlister, 34, a market stall trader from Bredgar Road, Archway, said: "I just picked up my son from nursery in Bredgar Road. I had just come out of the door when I noticed what was going on in the sky. There were a group of them - 10 to 15 of them moving together. My first impression was that they reminded me of a squadron of airplanes in formation. But they didn't have a proper formation and they were all moving at the same speed. I thought for a while that something was happening in the centre of London. Bombs and planes crossed my mind. But I realized very quickly that they didn't look like any aircraft I'd seen before. They were coming from the north and moving south. And then they kind of stopped and they were hovering. There was no sound. They seemed to fade away and I saw more coming and then they stopped. It lasted about 10 minutes." 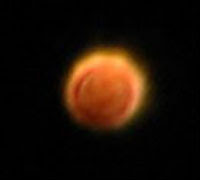 To this day, similar sightings are reported regularly in the United Kingdom. Recently, five orange orbs were seen near Mynydd Isa on Christmas Day 2007 and has prompted numerous reports from other residents of similar sightings in Flintshire, Wrexham and Chester in the UK.

One of the more interesting sightings was in Didum, Turkey when several people reported seeing a strange light ın the sky. The strange yellowish melon-shaped ball was spotted by several people near the police academy in Yeşilkent, while regulars at the Ark Cafe, in Hunters Valley, spotted the same UFO-style lights. Witnesses described how the melon-shaped object was moving fast and in a straight line before swerving towards the police academy direction and towards the sea before disappearing over the horizon.

Some of the best orb footage was taken by Michael Lee Hill, captured over Lake Erie from the northern Ohio shoreline. Hill's orb video from 2001 had also appeared in UFO's Unplugged with Dan Aykroyd and David Sereda's film "From Here to Andromeda". Flashing orbs over Lake Erie 9-18-2007 video below. 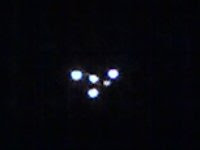 In another interesting incident, a small dazzling transforming orb was sighted in the skies of India. It was spotted by an executive of a private company who filmed it on his camcorder and showed it to the M. P. Birla Planetarium Director Dr. D. P. Duari.

Dr. Duari described the object as very bright, changing shape from a triangle into a sphere and then a straight line while emitting various colours at 30 degrees on the eastern horizon. "No natural phenomenon is likely to last for such a long duration and it is not a meteor either, It is extremely interesting and strange," Duari said.

Very similar objects has been seen and described worldwide. Transforming from a sphere to a triangle then back to a sphere and usually in a stationary position. There have also been reports of small orbs flying close to the ground and causing ground and crop disturbances.

I have been observing these reports for many years and it is alarming to me the number of recent sightings as well as the information forwarded by regular people. Is the flying orb activity not as frequent has I state and just the result of better technology available to the public? Maybe…but then again, that is a good thing in my opinion. I do take heart that there may actually be something out there. Recent “X-File” disclosures by a few governments have confirmed that we are not alone in this universe and that the phenomena we are seeing may not be a figment of our imaginations. In the meantime, we need to insist that more disclosure be made available and that sightings be investigated thoroughly.