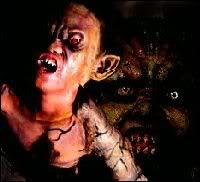 Some mythical creatures have their origin in tradition and tales from the distant past. However, each culture is associated with a multitude of interesting and odd creatures, many of these beings are humanoids. One of these legendary humanoids is the tiyanak.

Tiyanak (Demon Child) or impakto are creatures which, in Philippine mythology, imitate the form of a child. It usually takes the form of a newborn baby and cries like one in the jungle to attract unwary travelers. Once it is picked up by the victim, it reverts to its true form and attacks the victim. Aside from slashing victims, the tiyanak also delights in leading travelers astray or in kidnapping children.

Some say the tiyanak are babies who died before receiving baptism rites. After death, they go to a place known as Limbo, a chamber of Hell where unbaptized dead people fall into and transform into evil spirits. These phantoms return into the mortal realm in the form of goblins to eat living victims. The tiyanak can also be the offspring between a demon and a human or an aborted fetus, which comes to life to take revenge on its mother.

There are several versions of Tiyanak physical descriptions and activity. This mythical creature are also sometimes related to a Malaysian folkloric creature called Pontianak which is, according to Malay folklore, a woman who died during delivery or childbirth.

The Pontianak - in Malay folklore, it usually announces its presence through baby cries or assumes the form of a beautiful lady and frightens or kills those unlucky enough to come too close. It disguises itself as a beautiful young woman mainly to attract its victim (usually male). Its presence can sometimes be detected by a nice floral fragrance, followed by an awful stench afterward

According to folklore, one can bewilder the creature and break loose from the enchantment of its cries by turning his clothes inside out. The legend has it that Tiyanaks find this method laughable and would just leave the victim alone. Some say that repellents like garlic and the rosary can also drive the tiyanak away. 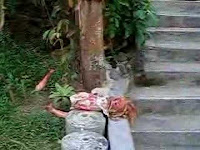 A screencap from a Filipino police video that supposedly depicts a young girl who was butchered by family members that suspected she was a tiyanak. It is alleged that the girl lured an older boy into the jungle and murdered him. I don't know the validity of the video but I decided to post it anyway

NOTE: occasionally, I'm going to post descriptions of worldwide legendary humanoids. I hope that you will enjoy these. BTW, I realize the video is cheesy and a dramatization performed by kids but it does give you an idea of the legend...Lon