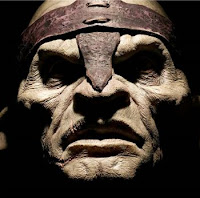 Some mythical creatures have their origin in tradition and tales from the distant past. However, each culture is associated with a multitude of interesting and odd creatures, many of these beings are humanoids. One of these legendary humanoids is the Orc.

Traditionally, Orc is a word used to refer to various races of tough and warlike humanoid creatures in various lore settings. The Orc is a demon of Tyrol alpine folklore. It lives on mountains, Almen, rock holes, or valleys. It warn the noble game of hunters or can be savage and destroy cattle. As a dwarf, the Orc was a well-behaved kobold or house spirit in home wine cellars.

Orcs are often portrayed as misshapen humanoids who are brutal and warmongering (J. R. R. Tolkien's used Orks in Lord of the Rings or as Goblins in The Hobbit). However, some settings and writers describe them as a proud warrior race with a strong sense of honor (Morgan Howell's Queen of the Orcs). They are variously portrayed as physically stronger or weaker than humans, but always high in numbers. They often ride boars, wolves and wargs. In many role-playing and computer games, Orcs mainly have green skin (in such games as Warhammer Fantasy, Warcraft, Magic: The Gathering and Dungeons & Dragons). Usually Orcs use a shamanistic magic unlike several other races such as Elves. However, their fighting skill is honed to maximum power and efficiency.

In Tolkien's writings, Orcs are of human shape, of varying size but always smaller than Men...ugly, filthy, with a taste for human flesh. They are fanged, bow-legged and long-armed, and some have dark skin as if burned. In a private letter, Tolkien describes them as "squat, broad, flat-nosed, sallow-skinned, with wide mouths and slant eyes...degraded and repulsive versions of the (to Europeans) least lovely Mongol-types".

Orcs fight with ferocity so long as a guiding 'will' (ex. Morgoth or Sauron) compels/directs them. In some instances, Tolkien describes Orcs as mainly being battle fodder (ex. The Battles of the Fords of Isen). Orcs are used as soldiers by both the greater and lesser villains of The Lord of the Rings — Sauron and Saruman.

Orcs eat all manner of flesh, including human. In The Two Towers, Grishnákh, an Orc from Mordor, claims that the Isengard Orcs eat Orc-flesh, but whether that is true or a statement spoken in malice is uncertain; what does seem certain is that, true or false, the Orcs resent that description. However, knowing what they are like and from later events, it seems likely that Orcs do eat other Orcs. 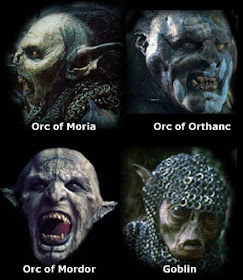 There are few differences between Orcs and Goblins as described by fantasy enthusiasts. Goblins are a lesser kind of Orc who dwell in caves. They can see in total darkness and can scale walls which help them to survive. Orcs are basically warriors, though there are more menacing Orcs. For example, Morranon Orcs are the same height of just under 6 ft., whereas normal Mordor or Isengard Orcs are a lot smaller. Uruk Hai are an advanced breed of Orc (possibly a hybrid of Orcs and Men). Uruk Hai all stand about 6 ft tall and resist the light of the sun better than Orcs, though their night vision is limited. The Berserkers are the top tier Orc, as demonstrated in The Battle of Helms Deep. They are shock troops and are trained to just kill opponents and as fast as possible. They are about 7 foot tall, 300 pounds and use a 5 foot long sword. Berserkers are said to drink human blood before battle in order to turned them into frenzied killers. Traditional Berserkers where said to be a race of Norsemen who fought unclothed and sent ahead of the regular warriors in order to inflict as much horror as possible.

Orcs are described as male creatures, though earlier references may have originally included females. The word Orc may actually be inspired by an Old English word in the poem Beowulf. Orcneas is termed as 'evil spirits of the dead' and is further explained as originating from 'the practice of necromancy, by which evil spirits were conjured by means of corpses back from the world of the dead.' Thus, there may be no need for female Orcs for reproduction.

On the other hand, a Tolkien enthusiast has referred me to the following passage. "But of those unhappy ones who were ensnared by Melkor little is known of a certainty. For who among the living has descended into the pits of Utumno, or has explored the darkness of the counsels of Melkor? Yet it is held true by the wise of Eressea, that all those of the Quendi who came into the hands of Melkor, ere Utumno was broken, were put there into prison, and by slow arts of cruelty were corrupted and enslaved; and thus did Melkor breed the hideous race of Orcs in envy and mockery of the Elves, of whom they were afterwards the bitterest foes. For the Orcs had life and multiplied after the manner of the Children of Iluvatar; and naught that had life of its own, nor the semblence of life, could ever Melkor make since his rebellion in the Ainulindale before the Beginning: so say the wise." -The Silmarillion, Of the Coming of the Elves. His assertion is that female Orcs were kept separate for breeding purposes...only to have contact with the males when more warriors were needed.