Ladies and Gentlemen, I Am Mr. Roarke....Welcome To Recycled Island! 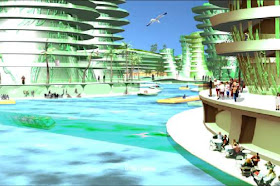 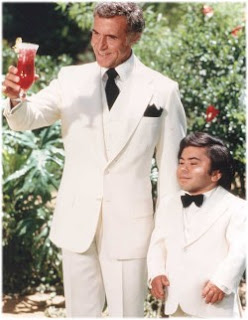 discovery - A group of architects have a radical new idea for cleaning up the Great Pacific Garbage Patch: turn it all into a giant island of recycled plastic complete with farmland, beaches -- even a city made of plastic buildings with a plastic subway system.

The project, dubbed "Recycled Island" by its creators, Dutch group WHIM Architecture, certainly doesn't lack for ambition. It calls for a massive cleanup of plastic in the North Pacific Gyre, the area of swirling ocean water infamous for collecting vast amounts of plastic trash.

Once collected the plastic is to be separated, melted down, and then used as building stock to create a floating island the size of the island of Hawaii. That's 10,000 square kilometers, or 3,861 square miles of plastic. All the processing can take place at sea, within the gyre, the WHIM folks write. Sand, compost, solar panels, undersea turbines will be brought in to create a self-sufficient, plastic utopia.

When complete, the island would sit somewhere between the Hawaiian Islands and San Francisco and serve as a refuge for people displaced by climate change, according to the plan.

If it all seems a little too easy, that's because it almost certainly is. For one thing, we only have a vague idea of how much plastic is in the global ocean, to say nothing of how much is floating in just the Pacific. There is no proven method for cleaning it up, and even if there was, the cost of gathering it alone would likely run into the tens of billions of dollars. 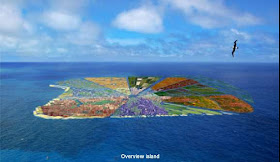 Also, how do you make a floating plastic island seaworthy?

And let's say it did work -- what would be the message for plastics manufacturers around the world? "Plastic's not a problem anymore. Please make more plastic bags and junk that people can toss into the oceans so it can eventually become floating islands." Kind of awkward environmentalism, to say the least.
RecycledIslandPuzzle

That's not to say it's impossible -- nothing is. But the project's engineering challenges and expense make it comparable to rebuilding post-Katrina New Orleans, or putting a man on Mars. Give credit to WHIM for thinking big and trying to solve one of our planet's biggest pollution problems. But all indications at this point are that we'd still be way better off trying to stop using plastic in the first place.