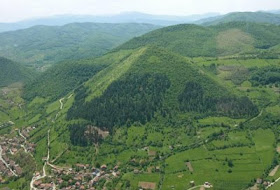 balkaninsight - In 2005 Semir Osmanagić, an expatriate Bosnian metalworker living in Texas, made a most startling announcement. The hills that surround the central Bosnian town of Visoko were not—as had always been thought—mere hills, but were in fact pyramids, man-made and ancient, built by a prehistoric civilisation that rivalled the ancient Egyptians in technological and cultural sophistication.

That Osmanagić's own consulted experts found his theories to be riddled with inaccuracies did not dissuade him. Nor did the fact that Bosnia was in an ice age 12,000 years ago, the time when the pyramids were supposedly built. Nor, either, did the fact that Bosnia's inhabitants at the time were itinerant hunter gatherers, who built no permanent structures—let alone huge monoliths. Five years on, the archaeological digs continue unabated, and the tourists arrive in droves.

The pyramids have taken over every aspect of the town; they have become its identity. Stepping out of the bus station when I arrived in Visoko, looked up at a cluster of roadsigns; all of the local Visoko ones bore on their left side a stylised pyramid, yellow on white. Crossing the bridge into town, I saw what used to be the Motel Hollywood; now, inevitably, it has become the Motel Piramida Sunca. Local restaurants serve "pyramid pizza". The town is gripped with pyramid fever.

I headed towards the "Pyramid of the Sun", the most overtly pyramidal of the four claimed pyramids and the closest to the town. A large white sign welcomed me to the "world's largest complex of pyramids", and a perspex box filled with coins invited donations to help fund further research. Eventually, I came to the dig site. Inside trenches, Malaysian archaeologists carefully probed the ground, scraping the soil from what looked simply to be ordinary rocks. To the side, a large section of hillside was fenced off, its exposed stone on display to the world: made up mostly of breccia, it looked perfectly natural, and did not have even the illusion of design about it.

As I prepared to ascend again past the dig site and to the top of the pyramid, a guide approached me and asked what I was interested in. I mumbled something awkward about the pyramids, but also mentioned Visoki, the ruined medieval fortress town that sits atop the so-called pyramid. "Visoki? You don't want to go there," the guide snorted. "All it has is some old walls and views of the valley. You must go to the tunnels; to go to Visoko and not see the tunnels would be madness!" He insisted that he drive me the two kilometres in his car—for €10, of course—but I declined; I had wanted to see Visoki for far longer than I had the pyramids. Visibly frustrated, he left me and headed back to his tourist group, and I resumed my ascent.

The route was treacherous, and barely a path at all; the forest grew more dense the higher I went, and the loose, sandy loam beneath my feet offered little traction. In places, the hill became near vertical, and its ascent more a process of rock-climbing than ofhiking; I thought with bitter amusement of the idea that this colossus had been crafted by human hands.

Eventually, bursting through a thicket, I found myself on a loose stone wall, its cement crumbling. Was this Visoki, I thought? Surely it would have some notice, some fence surrounding it? But it was; I was standing on one of the outer walls. Climbing further up, I eventually summited the hill and saw the rest of the structure. The sandy rock blazed yellow-white under the early afternoon sun, and as I walked further I saw the remains of one of the fortress's towers, covered in a plastic wrapping but otherwise neglected. There was no fence, not even a notice warning of the site's importance; it was thoroughly exposed, to the elements and to human interference.

Looking around, I saw why its location had been chosen: the fortress offered its defenders an unimpeded view of the whole Bosna valley, and approach to it was restricted to the shallower side of the hill. I thought of the bustling groups of tourists I had seen at the mock archaeological sites, barely metres away from where I stood; none had thought to ascend the hill any further, to see Visoki.

This seems to me the great tragedy of the pyramid hoax. I can understand its motivation, of course. Bosnia is not a rich country, nor Visoko a rich town; in the wake of the "discovery" the increase in tourist visits to the otherwise-overlooked Visoko must have been welcome. But Visoko has real history, real wonder, that is being neglected and ignored in the hurry to capitalise on the fame of the Bosnian pyramids. Osmanagić has shown himself to be a canny operator, able to mobilise and orchestrate the press with ease; that he felt the need to do so in promoting a false history of his own making—rather than the rich history to which Visoko was already legitimately home—says much of his ego, and is far less than Visoko deserves. 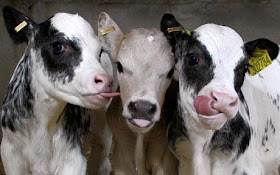 Even more rarely, two of the calves are from the Belgian Blue Cross breed and the third is a Charolais Cross.

Owner Anthony Gothard, 37, who runs a dairy farm at Stoke St Gregory, Somerset, said this is because Coco was inseminated using a ''concoction'' of different bulls.

He said: ''We were really surprised because we'd never seen it.

''There's three generations on the farm now and my grandfather came out to see them because he's never experienced it before.

''But what's quite uncanny as well as they're two different breeds of calf.

''Because we artificially inseminate our cattle we sometimes use a concoction of different bulls in the insemination.

''On rare occasions you might get a pare of twins where one is one breed and one another.

''What we've got here is two Belgian Blue Cross calves, and one Charolais Cross, which makes it even more amazing.''

Anthony, who has worked on The Old Dairy farm for 20 years, was delighted after Coco gave birth to the first healthy calf – a male Belgian Blue Cross – last Saturday (17/07).

He left the new mum to relax with her baby and carried on with work on the farm, where he produces Granny Gothard Ice Cream with wife Natasha, 34.

But when he returned later the farmer was delighted to find she'd calved again with another Belgian Blue, this time a girl.

Thrilled that his cow had given birth to twins – itself a relative rarity in cattle – Anthony once more left the cow on her own with it's now pair of young to settle down.

But in another hour when he returned to check on the new family he discovered Coco had given birth yet again – entirely unaided – to healthy third calf that was a Charolais Cross.

The thrilled farmer added: ''She actually calved one to start with, and she calved by herself, so we thought that was great – one good calf, one good cow.

''And then literally an hour later another one popped out. And then again in another hour there was another one there – three babies all delivered by herself.

''In four generations on the farm we've never seen triplets. It's just incredible she calved all three by herself with no problems at all. No help at all.

''And to have all three fit and healthy and strong is incredible, so our cow's obviously done a very good job.''

Experts from the Washington State University College of Veterinary Medicine have previously said a cow giving birth to triplets is a 'statistical miracle.'

The average gestation period is about nine months – like humans – and a newborn calf will weigh between 40 to 50kg, but within a year they are usually the same size as their parents.

telegraph - Six members of a Satanic cult were jailed for up to 20 years in Russia on Monday for four murders in which they "ritually sacrificed", dismembered and then ate their teenage victims in a forest.

The six were found guilty of "murdering four people with the aim of carrying out an initiation ritual into a sect and of desecrating the bodies of the dead," a court in the city of Yaroslavl, north-east of Moscow, said in a statement.

The group, four of whom were minors at the time, killed the four teenagers in June 2008, prosecutors said. They then desecrated the bodies and stole their possessions.

The dismembered bodies of the teenagers were found buried in the forest in August that year.

The members of the gang called themselves Satanists and earlier carried out animal sacrifices, Komsomolskaya Pravda, the Russian daily, reported, citing investigators.

They stabbed the victims and then dismembered their bodies and cooked and ate some body parts, Komsomolskaya Pravda reported.

The crimes were "revolting" and "inhumane", Ms Rachinskaya said.

Another member was convicted of murder but pronounced insane and sentenced to compulsory psychiatric treatment.

The court hearings were held behind closed doors due to the horrific nature of the crimes and because of the involvement of minors.

post-gazette - It didn't take a lot of great detective work for Swissvale police to find and arrest a North Braddock man charged with robbing a Citizens Bank branch Saturday morning.

Police Chief Greg Geppert said officers arrested Dennis Hawkins, 48, of North Braddock as he sat in a parked car at a service station at Washington Street and Monongahela Avenue wearing an outlandish disguise and covered in red dye that exploded all over him when he tried to open the money he took from the bank.

Chief Geppert gave these details of the incident:

Mr. Hawkins first drew attention at the Giant Eagle supermarket in Edgewood Towne Centre. He described him as a black man with facial hair who was wearing a female blonde wig, a sweater with fake breasts under it and clown pants.

He left the supermarket and went to the Kmart store at the shopping center, where surveillance cameras later showed him shoplifting a BB gun.

He then went to the bank a couple of blocks away on McCague Street, entered and sat down in the waiting area. He initially turned down a teller who offered to help him, saying he was waiting for someone else to arrive, then later approached her and robbed her at gunpoint.

Bank cameras showed he went to a tree behind the bank, opened the money envelope and dropped it and some of the money when the dye pack exploded.

He ran a couple of blocks to the service station, where he approached several customers and asked for a ride. When they refused, he got into the car of another woman, who got out, took her keys with her and went inside to call police.

Officers on their way to the bank robbery call went to the station and arrested him while he waited in the car. He had dye on him, the wig stuffed in the waist of his pants and was still wearing the fake breasts.

Chief Geppert said Mr. Hawkins told police he had found the money and took them back to the tree where the dye exploded.

Mr. Hawkins is being held at the Allegheny County Jail on bank robbery and other charges. 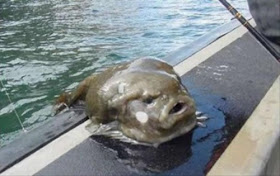 NOTE: It seems this lovely specimen freaked out most of the boat's guests, so much so that there was an overall sentiment that they had enough fishing, and drinking, for the day...Lon