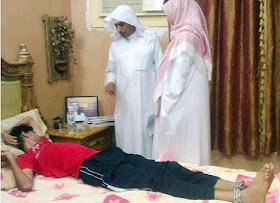 A Saudi man has been chained in a basement apartment for more than six years because his father believes he is possessed by an evil female genie.

'When he has fits he has convulsions and his entire body twists and his eyes become completely white,' said the father of the 29-year-old man who has been identified only as Turki.

'Then the voice of a woman can be heard coming from him.'

When Turki first began behaving bizarrely, his father took him to local Muslim clerics to recite the Koran over him.

'But most of them became scared when they heard the female voice telling them that she was a royal jinn (genie) and that no-one can exorcise her unless Turki dies,' his father said.

One cleric advised him to shackle his son’s arms and legs in chains and read the Koran to him.

But genies, or jinn, in Islamic theology can be much more sinister. Some are good, others bad.

They are believed to be normally invisible but have the ability to assume human or animal form and are often said to be motivated by jealousy or revenge.

'We did this. My son became quiet but is totally unaware of what is happening around him. He does not talk and is now unable to harm anyone,' Turki’s father told Arab News, an English language Saudi daily.

A Saudi family last year took a 'genie' to court, accusing it of theft and harassment.

The jinn was said to have terrified the children by throwing stones, stealing mobile phones and speaking in male and female voices.

Turki lives in a tiny, two-room basement apartment with his impoverished mother and her three other children in the holy city of Mecca. They survive on £150 a month from social security.

His parents divorced before he was 'possessed'.

Turki’s father claimed he himself was afflicted by a jinn at the age of nine and suffered for more than four decades until it was exorcised by a cleric.

'I used to see a woman who would at times appear very beautiful and at times extremely ugly,' he said.

On some occasions she was 'surrounded by fire' and on others appeared 'with animal limbs'.

A Saudi human rights activist and professor in Sharia (Islamic law) who visited Turki found him to be in a 'semi-coma'.

Muhammad Al-Suhali said Turki 'did not know what was going on around him. He could not eat, drink or use the toilet without the help of others'.

The professor added that when started to read some Koranic verses, Turki became furious and shook until he nearly fell out of his bed.

'When I stopped reciting, he became quiet again but was distant and unaware of what was happening,' Suhali told Arab News.

He praised Turki’s young wife for staying with him despite his frightening condition.

Suhali called on Saudi Ministry of Social Affairs to provide the family with better accommodation and to include Turki in its social security programme.

NOTE: Another fine example of Saudi barbarism...I just wonder how much stuff we never hear about...Lon

The resident of the east side of the village who saw it said she thinks it was in the cat family. A state wildlife expert said it is more likely to be in the dog family.

Rose Wingert, of Victoria Drive, reported seeing the animal in front of her home the morning of July 13. The animal ran away quickly, but Wingert said she was able to get a good look at it.

She said her first impression had been that it might be a coyote. But after checking photos of coyotes on the Internet, she decided the animal she saw wasn't one.

"At first, I didn't think too much of it, but then I started wondering, 'What was it?'" she said. "It was a lean and long animal," she added in an e-mail. "It was not a mountain lion, but a rare type of cat."

Contacted about identifying the animal, Andrew J. Montoney, state director for the U.S. Department of Agriculture's Wildlife Services in Reynoldsburg, said based on the description from Wingert, the animal is more likely to be in the dog family than the cat family.

Montoney said there are no native "cat" species matching this description in Ohio. However, he said the description -- a body about 3 feet long, a long tail and short fur of mottled (browns, blacks and grays) color -- could match any of three common "dog-like" species native to Ohio: the coyote, red fox and gray fox.

It also could have been a non-native, exotic animal, Montoney said.

"There are periodic reports of people seeing non-native (exotic) animals all throughout Ohio," he wrote in an e-mail. "When verified, these exotic animals usually turn out to be someone's pet that escaped or was intentionally turned loose due to difficulty of raising a wild animal. But these verified incidents are rare and uncommon."

Granville police received a report on the sighting the evening of July 13 but did not send out an officer. Granville Police Chief Jim Mason, who wasn't on duty at the time, said an officer mostly likely would have been sent if the report were timely.

In April 2008, another east-side resident, Char Donelan, reported seeing an unusual animal in her backyard on Longford Drive. The animal she described resembled the one Wingert reported. After viewing a video a neighbor took of the animal, Donelan said she thought it to be a coyote. 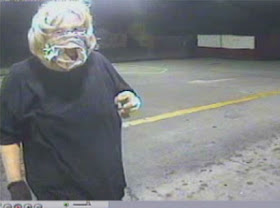 news9 - A middle-aged woman wearing what appeared to be underwear over her face is wanted in connection to an overnight drive-thru burglary.

On Tuesday morning around 3 a.m., an employee of the 24 hour McDonald's, at 7025 S.E. 15th Street, noticed that money was missing from the cash register in the drive-through.

When the manager reviewed the surveillance video, it showed a white female dressed in a black shirt, black pants, most likely a blonde wig, gloves and underwear over her face held in place with yellow paperclips, walking toward the drive-thru window. A car then pulls around the business and the female walks off.

A short time later, the same suspect walked up to the drive through window, slid it open, reached into the business with a cash drawer key and opened up the register. The woman stole money from the cash drawer and walk off. The employee who was working the drive-through was somewhere else in the business at the time of the theft.

"I've seen a wide variety of crime over the last 30 years but this particular case is one of the strangest based on her method of operation and weird disguise," said Midwest City Police Chief Brandon Clabes in a press release.

NOTE: You know times are tough when Grandma covers her face with a pair of old panties and grabs a couple of bucks out of a McDonald's drive-thru at 3:00am...Lon 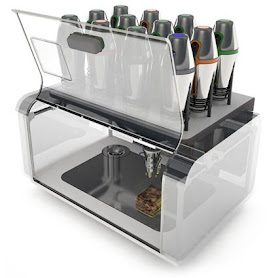 Cornucopia, the Food Printer...Now YOU Can Cook Like Jane Jetson

physorg - The food printer is at the concept design stage, and would work by storing and refrigerating ingredients and then mixing them, cooking layers of the mixture and printing them onto a serving tray. The concept design was introduced by two graduate students at the Massachusetts Institute of Technology (MIT) Fluid Interfaces Group Media Lab: designer/engineer in algorithmic image process development Amit Zoran, and designer and research assistant Marcelo Coelho. 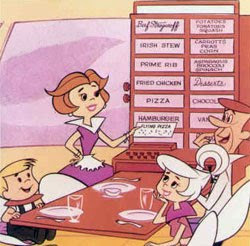 The food printing process begins with selecting the required food canisters in which ingredients are stored and kept refrigerated. Ingredients are then fed into a mixing chamber and the mixture is extruded and deposited in layers of various and complex combinations of ingredients. During deposition of the layers onto the serving tray the ingredients are either cooked or cooled in the chamber or by heating/cooling tubes attached to the printing head.

The researchers say the printing process brings cooking technologies into the digital age and allows entirely novel textures and flavors to be created that would otherwise be unimaginable and which are unobtainable through traditional cooking techniques. They say users would be able to control the nutritional value, quality and flavors in each meal through a touch-screen interface and Internet connectivity, which would allow them to manipulate parameters such as carbohydrate or fat content and calories. The design also allows for the food printer to be able to automatically order new ingredients and suggest an alternative ingredient if one runs out.

3D printers already exist (see, for example, PhysOrg’s article on 3D printers for moon bases and the affordable desk top 3D printer). The printers are becoming more common and are already being used in applications such as creating three-dimensional prototypes or models.

The researchers hope their concept will "provide a glimpse at the new aesthetic and cultural possibilities, which can be brought forth by a new, digital gastronomy."

'Well, Robin...I suppose we'll have to use the Bat Cave instead" 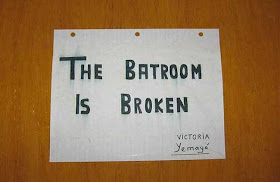