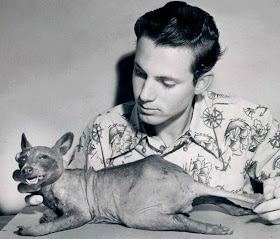 The caption reads: Chupacabra or What - Is It? If you know, you might tell Charles Hudson of Dallas, Tex. His coon dogs ran the strange creature down and killed it before he could stop them.

It has the head of a fox, tail of a possum, feet like a raccoon and is completely hairless.

A reader forwarded this photo yesterday. Is this a 'Blue Dog'? 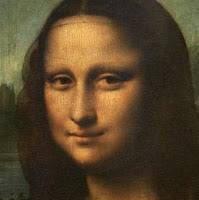 Specialists from the Center for Research and Restoration of the Museums of France found that da Vinci painted up to 30 layers of paint on his works to meet his standards of subtlety. Added up, all the layers are less than 40 micrometers, or about half the thickness of a human hair, researcher Philippe Walter said.

The technique, called "sfumato," allowed da Vinci to give outlines and contours a hazy quality and create an illusion of depth and shadow. His use of the technique is well-known, but scientific study on it has been limited because tests often required samples from the paintings.

The French researchers used a non-invasive technique called X-ray fluorescence spectroscopy to study the paint layers and their chemical composition.

They brought their specially developed tool into the museum when it was closed and studied the portraits' faces, which are emblematic of sfumato. The project was developed in collaboration with the European Synchrotron Radiation Facility in Grenoble.

The tool is so precise that "now we can find out the mix of pigments used by the artist for each coat of paint," Dr Walter said. "And that's very, very important for understanding the technique."

The analysis of the various paintings also shows da Vinci was constantly trying out new methods, Dr Walter said. In the "Mona Lisa," da Vinci used manganese oxide in his shadings. In others, he used copper. Often he used glazes, but not always.

The results were published in Angewandte Chemie International Edition, a chemistry journal.

Ed Hubbard ('Witch School' founder and L. Ron Hubbard relative) Admits to Being a Member of the Illuminati?

witchschool - I am accused of all sorts of things, but this takes the cake. Here is the statement, "Ed Hubbard is a member of the Iluminati, and will soon be inducted into the Witch-Druid Council of 13 as he has created the first global school to induct people into Witchcraft, with members in 180 countries and is responsible for over a 1000 covens. It will happen in Salem on October 31st, 2010."

It was a personal accusation by a Christian group, who believe the Illuminati, a nefarious secret society is attempting to take out our society. Here is a article, and in it, the accuse Dr. Raymond Buckland, and they allege that in some ways, I am the largest single Witch Missionary in the history of the world. There is some truth in that, but Illuminati, let us be serious.

From The High Weirdness Project - What is 'Witch School'? - When pagans, spellcasters, astrologers, psychics, and other New Agers want a steady source of income, they inevitably all set up their own schools with "courses" and classes. Witch School, and its founder Ed Hubbard, has been trying to go the whole nine yards: they're trying to become fully accredited (like that's going to happen); they've been putting out press releases at least once per week; they're looking into book deals – and there's even a lot of gossip about the Sci Fi Channel building a reality TV series around them. (I must admit, "reality TV" based on a pagan witch school is a lot more realistic than most of those other reality TV shows.) These efforts to gain attention did result in a backlash when Hubbard tried to open an actual real-life school in Hoopeston, Illinois. The citizens of the town didn't like the idea of a non-Christian pagan "school," though, and they began signing petitions in opposition to the school and lobbying the City Council to try to stop it. This didn't stop the Witch School from opening; however, the brick-and-mortar campus didn't last long. The actual building shut down in early 2007, though the Web site continues to function.

From the beginning, the school has been at the center of pagan insider politics, backstabbing, flames, gossip, and money changing hands since the beginning. Paganism may be about the spirit, the Goddess, and purity, but this organization has been about money.

And all of a sudden in early 2007, Witch School's founder put it up for sale. With little advance warning, he put the entire school, complete with Internet domain names, up for sale on eBay and asked for a price of $100,000. This caused a furor in pagan circles. The Wild Hunt blog has been covering the ongoing scandal, and it's worth looking at for those who enjoy sniping, snarking, and whining amongst the pagans.

The school itself does its best to look professional and scholarly. Students can sign up for classes in First Degree, Second Degree, and Third Degree "Correllian Wicca," which is what Hubbard and his associates call their version of the faith. As part of the required school supplies, they sell a sizable selections of Power Wands. Their library (accessible only to paid students) offers a number of e-books to download, with titles ranging from Aleister Crowley to Houdini…to Ed Hubbard. They also offer a Spell of the Day and a board of "Energy Requests" for students and faculty to focus healing energies.

(What's more, Ed Hubbard is apparently related to L. Ron Hubbard. This has sparked some fruitcake outcries from some conspiracy-oriented pagans that the Witch School is actually a front for Scientology.) 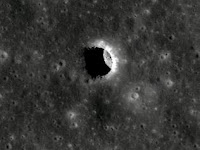 news.com.au - US President Barack Obama may have to reconsider his decision to abandon plans to return to the Moon - it seems our closest galactic neighbour is still throwing up surprises.

Early in May, it found lost Soviet rover Lunokhod 1, which wandered off course 40 years and stopped sending signals back to Earth.

Later that month, it sent back an amazing image of a three-storey high boulder which had rolled across the Moon's surface before toppling into a crater.

Now it may have confirmed a theory that scientists had held about the Moon since the 1960s - its surface may hide a vast network of tunnels.

If they exist, such tunnels could offer the kind of shelter that would allow humans to live on the Moon.

"They could be entrances to a geologic wonderland," lead researcher Mark Robinson of Arizona State University said.

The series of photos were taken by the LRO when it passed over the Marius Hills, a location on the Moon known for its multitude of "rilles" - the long channels on the surface which first led scientists to propose the tunnel theory.

In December last year, Japanese orbiter Kaguya spotted an enormous pit in the middle of one of the Marius Hills rilles.

It was about 70m wide and dropped more than 90m to its floor.

The LRO recently returned clearer images of the pit which now have scientists believing it may be a "skylight" in a buried lava tube.

Not surprisingly, alien watchers have jumped on the discovery, claiming its the perfect lair for extraterrestrial life, but Mr Robinson said if the tunnels existed, they could have a practical use for humans.

"The tunnels offer a perfect radiation shield and a very benign thermal environment," he said.

"Once you get down to two metres under the surface of the moon, the temperature remains fairly constant, probably around -30 to -40 degrees C."

Just what we would do once we got there is anyone's guess, but given that other recent discoveries point to the fact the Moon may hold 100 times more water than we think, habitable areas could be worth noting.