dailymail - A former Russian spy's dossier which suggests that Government scientist David Kelly was 'exterminated' in a planned assassination is being studied by the Attorney General.

Boris Karpichkov, who fled to Britain after 15 years as a KGB agent, claims a London intelligence contractor linked to MI5 told him Dr Kelly's death was not suicide.

Mr Karpichkov has emailed his evidence to Attorney General Dominic Grieve - who has already said he is 'concerned' by questions raised by doctors who dispute the official suicide ruling over the Iraq expert's death.

Last night a spokesman for Mr Grieve confirmed that the dossier had been received, and that it was being 'considered'.

Dr Kelly's body was discovered in woods close to his Oxfordshire home in July 2003.

Tony Blair's Labour Government had controversially unmasked him as the source of a hotly-disputed BBC news story that claimed a dossier used to justify the war on Iraq had been 'sexed up'.

Lord Hutton's public inquiry ruled that Dr Kelly killed himself, but since the ousting of Labour in May there has been growing pressure from within the coalition Government for a new independent inquiry.

A group of doctors have claimed Dr Kelly could not have died as a result of cutting his left wrist with a blunt garden pruning knife, and it has emerged that his death certificate was left incomplete.

There is also outrage at the fact that full details of his postmortem examination are to be kept secret for 70 years, and that no inquest took place.

Campaigners also note that on the morning of his death Dr Kelly sent an email warning of 'many dark actors playing games'.

The new allegations from Mr Karpichkov suggest directly that the 'dark actors' could have been British secret agents determined to silence Dr Kelly before he could embarrass the Government.

Agent: According to Boris Karpichkov Peter Everett told him that David Kelly was 'exterminated' for his 'restless behaviour'

The former Russian spy, who defected from Latvia to Britain in 1998, says the source of his dossier is 'agent' Peter Everett, who lives in Dulwich, South-East London, and until 2006 ran a shadowy firm, Group Global Intelligence Services.

The firm is understood to have employed former MI5 operatives to carry out detective work for corporations.

Mr Karpichkov, who now holds a British passport, claims in his dossier that he worked for Mr Everett too, and that one of their dozens of meetings took place two days after Dr Kelly's body was found.

Mr Everett told him, the former KGB man claims, that Dr Kelly had been ' exterminated' for his ' reckless behaviour'.

Mr Karpichkov says Mr Everett suggested he was himself an 'active field operative' for MI5, and continues: 'He told me that it was extremely uncomfortable, inconsistent and unusual for Dr Kelly to slash his arm in the way he did. He would have lost some blood, but it would not have been fatal.

'He also claimed that it was not a coincidence that Special Branch officers were the ones who first appeared on the scene. They moved Dr Kelly's body to another location, changed the original position of his corpse and took away incriminating evidence.

'He added that the scene where Dr Kelly's body was found was carefully arranged and completely "washed out", including the destruction of all fingerprints.

'When I asked who was behind his death, he [ Mr Everett] answered indirectly, saying the "competing firm", which I took to mean MI6.'
Iraq.jpg

At the weekend, Mr Everett confirmed that he had met Mr Karpichkov, and that he had discussed Dr Kelly's death. But he denied being party to any secret s about the incident.

He refused to comment on whether he had ever worked for MI5, but agreed he had 'spent a number of years working in the world of intelligence'.

Mr Karpichkov's dossier comes on top of a claim by Dr Kelly's colleague Mai Pedersen that the chemical warfare expert had been too weak to slash his own wrist. 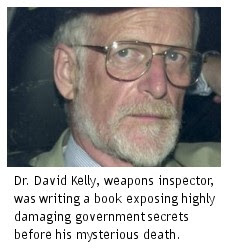 dailymail - Vital evidence which could solve the mystery of the death of Government weapons inspector Dr David Kelly will be kept under wraps for up to 70 years.

In a draconian – and highly unusual – order, Lord Hutton, the peer who chaired the controversial inquiry into the Dr Kelly scandal, has secretly barred the release of all medical records, including the results of the post mortem, and unpublished evidence.

The move, which will stoke fresh speculation about the true circumstances of Dr Kelly’s death, comes just days before Tony Blair appears before the Chilcot Inquiry into the Iraq War.

It is also bound to revive claims of an establishment cover-up and fresh questions about the verdict that Dr Kelly killed himself.

Tonight, Dr Michael Powers QC, a doctor campaigning to overturn the Hutton findings, said: ‘What is it about David Kelly’s death which is so secret as to justify these reports being kept out of the public domain for 70 years?’

Campaigning Liberal Democrat MP Norman Baker, who has also questioned the verdict that Dr Kelly committed suicide, said: ‘It is astonishing this is the first we’ve known about this decision by Lord Hutton and even more astonishing he should have seen fit to hide this material away.’

The body of former United Nations weapons inspector Dr Kelly was found in July 2003 in woods close to his Oxfordshire home, shortly after he was exposed as the source of a BBC news report questioning the Government’s claims that

Saddam Hussein had an arsenal of weapons of mass destruction, which could be deployed within 45 minutes.

Lord Hutton’s 2004 report, commissioned by Mr Blair, concluded that Dr Kelly killed himself by cutting his wrist with a blunt gardening knife.

It was dismissed by many experts as a whitewash for clearing the Government of any culpability, despite evidence that it had leaked Dr Kelly’s name in an attempt to smear him.

Only now has it emerged that a year after his inquiry was completed, Lord Hutton took unprecedented action to ensure that the vital evidence remains a state secret for so long.

A letter, leaked to The Mail on Sunday, revealed that a 30-year ban was placed on ‘records provided [which were] not produced in evidence’. This is thought to refer to witness statements given to the inquiry which were not disclosed at the time.

In addition, it has now been established that Lord Hutton ordered all medical reports – including the post-mortem findings by pathologist Dr Nicholas Hunt and photographs of Dr Kelly’s body – to remain classified information for 70 years.

The normal rules on post-mortems allow close relatives and ‘properly interested persons’ to apply to see a copy of the report and to ‘inspect’ other documents.

Lord Hutton’s measure has overridden these rules, so the files will not be opened until all such people are likely to be dead.

Last night, the Ministry of Justice was unable to explain the legal basis for Lord Hutton’s order.

The restrictions came to light in a letter from the legal team of Oxfordshire County Council to a group of doctors who are challenging the Hutton verdict.

Last year, a group of doctors, including Dr Powers, compiled a medical dossier as part of their legal challenge to the Hutton verdict.

They argue that Hutton’s conclusion that Dr Kelly killed himself by severing the ulnar artery in his left wrist after taking an overdose of prescription painkillers is untenable because the artery is small and difficult to access, and severing it could not have caused death.

In their 12-page opinion, they concluded: ‘The bleeding from Dr Kelly’s ulnar artery is highly unlikely to have been so voluminous and rapid that it was the cause of death. We advise the instructing solicitors to obtain the autopsy reports so that the concerns of a group of properly interested medical specialists can be answered.’

Tonight, Dr Powers, a former assistant coroner, added: ‘Supposedly all evidence relevant to the cause of death has been heard in public at the time of Lord Hutton’s inquiry. If these secret reports support the suicide finding, what could they contain that could be so sensitive?’

The letter disclosing the 70-year restriction was written by Nick Graham, assistant head of legal and democratic services at Oxfordshire Council.

It states: ‘Lord Hutton made a request for the records provided to the inquiry, not produced in evidence, to be closed for 30 years, and that medical (including post-mortem) reports and photographs be closed for 70 years.’

Nicholas Gardiner, the Chief Coroner for Oxfordshire, confirmed that he had seen the letter.

Speaking to The Mail on Sunday today, he said: ‘I know that Lord Hutton made that recommendation. Someone told me at the time. Anybody concerned will be dead by then, and that is quite clearly Lord Hutton’s intention.’

Asked what was in the records that made it necessary for them to be embargoed, Mr Gardiner said: ‘They’re Lord Hutton’s records not mine. You’d have to ask him.’

He added that in his opinion Lord Hutton had embargoed the records to protect Dr Kelly’s children.

The inquest into Dr Kelly’s death was suspended before it could begin by the then Lord Chancellor Lord Falconer. He used the Coroners Act to designate the Hutton Inquiry as ‘fulfilling the function of an inquest’.

News that the records will be kept secret comes just days before Mr Blair gives evidence to the Chilcot Inquiry on Friday.

To date, Dr Kelly’s name has scarcely been mentioned at the inquiry. One source who held a private meeting with Sir John Chilcot before the proceedings began said that Sir John had admitted he ‘did not want to touch the Kelly issue’ .

A spokesman for the Ministry of Justice said: ‘Any decision made by Lord Hutton at the time of his inquiry was entirely a matter for him.’

A spokesman for Thames Valley Police said yesterday that it would not be possible to search their records during the weekend.

David Christopher Kelly, CMG (14 May 1944–17 July 2003) was an employee of the United Kingdom Ministry of Defence (MoD), an expert in biological warfare and a former United Nations weapons inspector in Iraq. Kelly's discussion with BBC Radio4 Today programme journalist Andrew Gilligan about the British government's dossier on weapons of mass destruction (WMD) in Iraq inadvertently caused a major political scandal. He was found dead days after appearing before the Parliamentary committee charged with investigating the scandal.

The Hutton Inquiry, a public inquiry into the circumstances surrounding his death, ruled that he had committed suicide, and that Kelly had not in fact said some of the things attributed to him by Gilligan. The following day, 28 January 2004, the Independent ran a special issue, the front cover being largely blank and containing in the centre, "WHITEWASH? THE HUTTON REPORT. A SPECIAL ISSUE." - Wikipedia
________________________