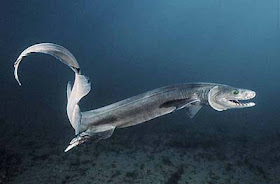 Above: Was the Fiji sighting a Frilled Shark?

fijitimes - A strange looking marine creature reportedly spotted in lagoon waters of three villages in Cakaudrove are keeping fishermen and divers away from sea.

Naiqaqi Village headman Jepeca Nakuvu said villagers from the neighbouring village of Laucala and Valeni were scared of going out to sea because of the creature.

Ateca Disukavanua, 50, said she was fishing near a copse of mangrove called Dogodogo on Monday when she saw a black creature swimming towards her.

"At first I thought it was a log but then it moved closer and I was so scared because the water was up to my waist I jumped on top of a mangrove stump," she said. "I hung on to that mangrove tree for about an hour and the creature, which was about three foot long, and had flippers like that of a turtle and had a strange long mouth.

"I had never seen such a thing before in my life. I was shaking because it kept hanging around as if it smelt the place where I was standing.

"I only got down when the tide went out and the water was only ankle high."

Mr Nakuvu said men from the three villages armed themselves with cane knives, digging forks and spears and looked for the creature hoping to kill it.

"When we know it is dead we will go out to sea because we are scared because this is something that we are not familiar with," he said.

The village headman said they had lodged a complaint at the Savusavu Police Station. 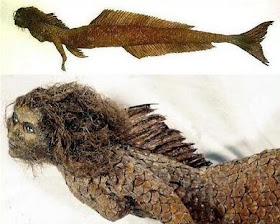 Above: One of many 'Fiji Mermaid' (Ningyo) hoaxes

NOTE: The speculation and ridicule I have read on other sites in reference to this sighting have led to suggest that this was a frilled shark, eel, yada, yada, yada. But, these accounts fail to mention that the villagers have been fishing these waters for hundreds, if not thousands, of years and are most likely familiar with the odd wildlife living in their waters. Frilled sharks are deep dwellers that are distributed worldwide but in sporadic locations. In the past, a few cryptozoologists have suggested the existence of a giant relative of the frilled shark that is known from the fossil record. Simply, there are many species of fish and other water dwelling animals that we know nothing about. Our oceans are truly the last wilderness on our planet. Look, I'm not saying it wasn't a frilled shark...there have been surface sightings in the past. In fact, there was a sighting of one of these creatures in January 2010 off the coast of Japan. IMO, the physical and behavioral description in this sighting is not that of a frilled shark...or at least the known species of the creature. BTW, I'm fairly certain it wasn't a 'Fiji Mermaid'...Lon

Have you had a close encounter or witnessed something unusual?
Send us an email

Become a fan of 'Phantoms and Monsters' at Facebook

Listen to our segment
'Strickly Paranormal: For Those Seeking the Truth!'

"The latest news from beyond the mainstream"
Join Ben & Aaron for their weekly podcast!
Check out Mysterious Universe Plus+ all access format!

Join the
Phantoms & Monsters Wiki
A network for paranormal investigators, enthusiasts and those
seeking the truth